TAIC has opened an inquiry into a helicopter accident involving a Robinson R22 helicopter at Karamea on the South Island West Coast on 2 January 2022. The helicopter was approaching to land when it experienced difficulties, pitched down and impacted the ground hard. The pilot, the only person on board, has reportedly suffered serious injuries and been flown to hospital.

TAIC is investigating the hot air balloon accident on the morning of 1 January 2022 near Asburton. TAIC is calling for anyone to come forward if they saw the accident or observed the balloon in flight. Reportedly, during a rough landing, the balloon pilot was ejected from the basket, was caught in a rope, and dragged some way before the balloon came to rest and the basket tipped over. The pilot is reported to have been seriously injured in the accident.

A pair of locomotives was hauling a long train of freight wagons. Flood waters had damaged the line. Reportedly, one locomotive and 12 wagons derailed. No injuries were reported.

Two people died when a freight train ran into a car at a level crossing, caused by confusion for the car driver in a complicated roadworks operation. Traffic management plans for roadworks at level crossings must identify all risks to road and rail vehicles. Work in the rail corridor must only be done with a permit from the rail access provider.

The March 2019 crash of a Diamond DA42 light plane in the Kaimanawa Ranges near Taupō had the characteristics of a ‘controlled flight into terrain’ accident. Avoiding similar accidents in future depends on pilots understanding CA Rules; using safety technology to its fullest practicable extent, and thinking ahead. And flight training schools need to ensure their staff follow correct procedures.

TAIC is appealing for witnesses who saw, photographed or videoed a boating accident at the entrance to Manukau Harbour on the afternoon of Saturday October 16. Keen to hear as soon as possible from people who saw the accident or observed the boat at any time in its journey.

TAIC has opened an inquiry into an accident involving an Eurocopter ‘Squirrel’ AS350 helicopter reported to have impacted terrain in the Lammerlaw Range above the Waipoti River, Otago, with one fatality, the pilot, who was the only person on board. TAIC is keen to hear from anyone who heard or saw the helicopter in flight or witnessed the accident. 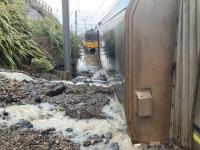 New TAIC inquiry into derailment of a Kapiti Line commuter train that derailed between Paekākāriki and Pukerua Bay where a landslip had covered the track. All rolling stock remained upright. 82 passengers and 3 staff disembarked with no injuries. TAIC appealing for witnesses – particularly if they can help us with photographs or videos.

Level crossing safety is about more than the necessity of road users and pedestrians following the rules and looking out for trains. The TAIC Watchlist item on safety for pedestrians and vehicles at level crossings shows that safety depends on infrastructure, technology, systems and rules all working together. Any change in one aspect means planners must consider the others.

TAIC calling for witnesses to hot air balloon accident. Balloon experienced difficulty on landing, canopy contacted power lines, draped over a house. Of 11 on board, some ejected from basket in the process. Reportedly, several were injured, including hospitalisations. No fatalities reported.