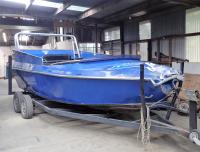 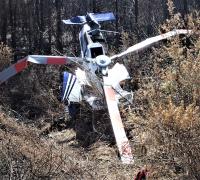 TAIC has published its report on the February 2017 accident in Port Chalmers, Dunedin, on board the passenger cruise ship Emerald Princess, in which a nitrogen cylinder burst, causing one fatality. The cylinder burst below its normal operating pressure, because it had been weakened by corrosion. Nitrogen cylinder stored energy systems are common on lifeboat launching installations for cruise ships, and there is a lack of global minimum standards for them.

The Commission has published an interim report on the recent fatal accident near Wanaka Aerodrome on 18 October 2018. The pilot and the two other occupants died in the accident. TAIC Chief Commissioner Jane Meares says a major safety issue highlighted by the interim report is the risk posed by loose items in the cabins of helicopters.

The report issued today is an interim report, so it includes no formal Findings. All evidence (including of any mast bumping) and the role it may have played in the accident sequence is subject to further investigation.

In October 2016, the Commission placed an item on its Watchlist titled Robinson helicopters: mast bumping accidents in New Zealand. The item was developed in response to a series of 14 accidents or incidents involving these helicopters (investigated either by the Commission or by the Civil Aviation Authority), including nine where low-G mast bumping is known to have occurred. The Commission sees good progress towards implementation of the actions we were seeking when we first placed this item on the Watchlist. The Commission is encouraged by the efforts taken by the sector since this safety issue has been placed on the Watchlist, particularly the manufacturer’s response to our recommendations, and its demonstrated commitment to safety. The sector must continue its efforts to reduce the risk of mast bumping accidents occurring.