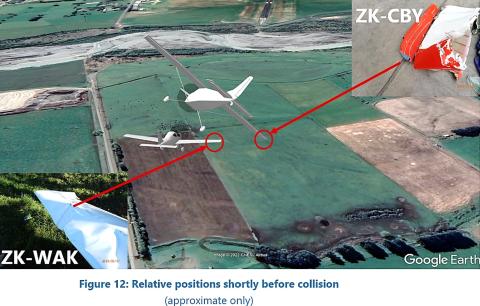 The Transport Accident Investigation Commission (TAIC) has published its final report on a fatal mid-air collision near Hood Aerodrome, Masterton in June 2019.

A Cessna light aeroplane and a Tecnam microlight, each with only a pilot on board, were approaching to land at about the same time on parallel runways at Masterton. The Cessna was joining the circuit via a wide right turn for the left-hand runway, while the Tecnam was in the circuit approaching the right-hand runway and had right of way. The Tecnam was in front of the Cessna but very likely hidden below the Cessna’s engine.

The faster Cessna gained rapidly on the Tecnam and the overtaking Cessna impacted the right side of the Tecnam, striking it from above and behind. The two aircraft initially tangled before separating and spiralling to the ground. The two pilots died in the collision.

TAIC’s Chief Investigator of Accidents, Naveen Kozhuppakalam, says this accident happened because the Cessna did not give way to the Tecnam.

“The Cessna’s route to join the circuit was non-standard and disregarded civil aviation rules, but the pilot had been trained to do it this way in accordance with this accepted local practice at Hood Aerodrome.

“The Commission’s report underscores how vital it is that pilots keep a lookout for other aircraft, listen to radio calls from other planes, obey civil aviation rules, and follow standard operating procedures.

Turning to the broader circumstances that made this accident more likely, the Commission considered New Zealand’s busy local aerodromes with no air traffic control.

“Safety depends not just on operators and pilots of aircraft, but also aerodrome owners, operators, managers and ground staff; they should all have appropriate training and support, with scrutiny and further support from safety regulators the Civil Aviation Authority and WorkSafe.”

The Commission found unattended aerodromes differed in their compliance with Civil Aviation Rules; in ‘simultaneous operations’ practice (planes taking off and landing on close parallel runways); and in observing the requirement to report safety incidents.

The Commission recommended that the CAA:

TAIC has received a positive response from the Civil Aviation Authority, which has accepted and committed to address all of these recommendations .