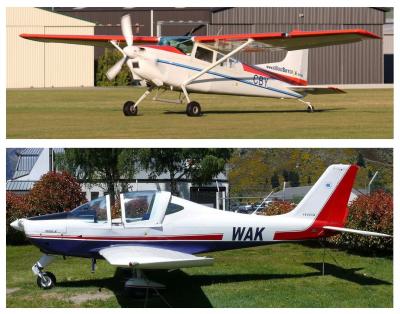 On Sunday 16 June 2019, Tecnam P2002 ZK-WAK, a microlight two-seater aeroplane,
was on a short local flight around Masterton with a pilot only on board. At the same
time, Cessna 185A ZK-CBY, a light aeroplane, was being used for parachuting
operations over Masterton Aerodrome.

At 1112, both aeroplanes were preparing to land back at Masterton Aerodrome when
they collided. The collision occurred as ZK-WAK was on the final approach to land on
runway 06, the sealed main runway. Meanwhile ZK-CBY had completed its parachute
drop and was turning onto the final approach to land on runway 06L, a parallel grass
runway. ZK-CBY, the faster of the two aeroplanes, struck ZK-WAK’s right side as it
approached from the right and behind.

Both pilots were killed in the collision and both aeroplanes were destroyed.

The pilot of ZK-CBY was joining the non-standard right-hand for runway 06L, as this
was how they had been instructed to join. The pilot of ZK-CBY, as the joining aircraft,
needed to give way to ZK-WAK, but did not see it in time to avoid the collision. The
non-standard join was at variance with Civil Aviation Rules (CARs), but had become an
accepted practice at the aerodrome. A recommendation was made about the need to
address non-compliance and incident reporting, particularly at unattended
aerodromes.

Both aeroplanes were approaching the runways at the same time. The aerodrome
chart informed pilots that ‘simultaneous operations’ were prohibited. However, there
was no definition of what ‘simultaneous operations’ were, and as a result there were a
range of interpretations. A recommendation was made to address this deficiency and
review aerodrome charts generally to ensure they are relevant and consistent.

The Commission has investigated two previous mid-air collisions that have occurred at
unattended aerodromes – Paraparaumu in February 2008 and Feilding in July 2010.
The investigation into the Masterton incident identified factors that were common to
all three mid-air collisions, which included:
- the collisions occurred at unattended aerodromes
- each collision involved an aircraft that was re-joining
- the weather conditions on each occasion were good
- pilots made appropriate radio calls, updating the location and intentions
- all the pilots were familiar with the aerodrome and procedures
- each collision involved a pilot in one of the two aircraft who held a commercial
pilot licence or higher qualification.

As a result, the investigation found safety issues that were common to the three midair
collisions, including:
- pilots not actively listening to the radio calls from other aircraft
- the adequacy of the training and support of aerodrome managers, especially at
unattended aerodromes.
There was insufficient evidence to determine the level of influence that weather,
familiarity and pilot experience may have played as a common factor.

Recommendations were made to address these deficiencies.

Pilots, regardless of experience, need to maintain an effective lookout and proactively
listen to the radio calls made from other aircraft. Pilots need to be aware of and
comply with CARs and follow standard operating procedures.

Aerodrome owners and operators, in conjunction with the Civil Aviation Authority
(CAA) and WorkSafe New Zealand, need to collectively ensure aerodrome operators
and aerodrome managers are appropriately trained and supported.