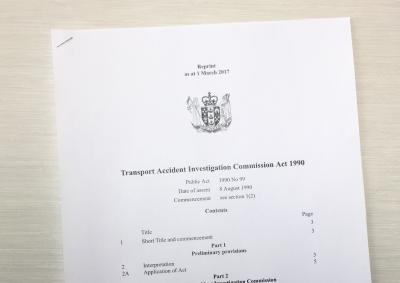 The Commission is established by the Transport Accident Investigation Commission Act 1990. The Commission's corporate form is an independent Crown entity subject to the provisions of the Crown Entities Act 2004.

The Commission’s powers enable it to carry out its inquiries, and includes the power to prohibit access to an accident site, to inspect and remove records, and to secure physical evidence. Some of its powers are provided under the Commissions of Inquiry Act 1908.

The Commission’s legal framework and working practices are consistent with international obligations and standards for safety-focused investigation of significant transport accidents or incidents.

This page is not intended to be legal advice.

Through its reports and recommendations, the Commission meets New Zealand’s international obligations under a number of international conventions, including:

TAIC's jurisdiction extends to the 12 nautical mile limit of New Zealand's territorial waters, the land within that, and the air above, and to New Zealand registered aircraft or ships anywhere in the world. By agreement, another country may lead investigations into occurrences in international waters or airspace involving NZ-registered ships and aircraft, such as one closer to the accident site or where an aircraft was made.