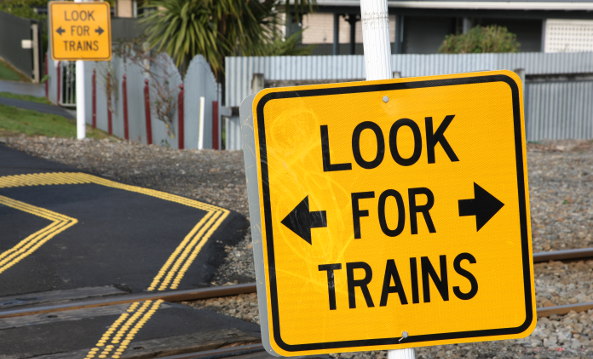 Commission investigations have highlighted safety improvements that could have been, or should be, made for road vehicles or pedestrians using level crossings. Recent inquiries have found ambiguities in who is responsible for the safety of pedestrians crossing rail lines, a particular concern in metropolitan areas with growing patronage, and growing frequency of trains. Other inquiries have shown that changes to rules and standards for road vehicles such as permissible lengths and clearances are incompatible with the conditions at some level crossings such as sight lines and road camber. The  potential remains for serious accidents to continue to occur as a result of these problems identified through our inquiries.

What is the problem?

Safety for pedestrians and vehicles using railway level crossings is being compromised because of ambiguities in the responsibilities between the road and rail authorities; and because the implications for the road-rail interface are sometimes not recognised when changes are made to vehicle technology or rail infrastructure.  Even when accidents cause limited train damage or minor injuries, such events can be traumatic for all involved.

What is the solution?

The regulator, business operators, and road control authorities need to work closely to ensure the interface between rail and surrounding infrastructure provides the appropriate level of protection for pedestrians, road vehicles, trains, and those on board.

When pedestrians or vehicles use level crossings, the potential exists for serious accidents to occur. Safety measures depend on infrastructure, technology, systems, and users working together. A change in one of these factors must take account of its effect on the others if safety is not to be compromised.

In early 2015, the Commission opened an inquiry into a pedestrian fatality at Morningside, a metropolitan railway station in Auckland [1]. There had a been a previous fatality at this station and several near misses. The investigation highlighted how changes to the rail infrastructure can inadvertently compromise safety. The design of the existing pedestrian ‘maze’ at the station was constructed to force pedestrians to face in the direction of approaching trains before they turn and cross the tracks. Mazes are in place at many stations around the country. With increasing rail traffic at Morningside, signalling changes were made to allow trains to run in both directions along the tracks. The change means trains could now be approaching from behind pedestrians, so defeating the maze design.

The Commission found the process for assessing risk at pedestrian crossings is not keeping pace with the infrastructure changes and increasing patronage on metropolitan passenger trains. We issued urgent recommendations [2] to deal with three immediate safety issues:

These issues need the regulator, business operators, and road control authorities to work together and for their responsibilities to be clear. Pedestrians and road users also need to take responsibility for avoiding distractions, or failing to see, hear or respond to warning signals or trains.  The needs of disabled users should always be considered.

The final report was released in August 2016. A further recommendation was issued to deal with the safety issue of pedestrian level crossings in provincial areas that do not fully conform with guidelines related to traffic control devices.

In 2016, the Commission closed an inquiry into a train and truck collision at a level crossing near Rangiriri in 2014.[3] Because of the permitted train speed and available sight lines at the crossing, it was possible that a truck would be unable to safely cross after stopping and confirming it was clear. We recommended that the NZ Transport Agency work with KiwiRail and all road controlling authorities to ensure assessments of rail level crossings include a measure of the road profile and compatibility with the allowable dimensions for long and low road vehicles. The recommendation was closed in August 2018. We have made similar recommendations in earlier reports.[4] An urgent recommendation made in relation to a crossing (at Beach Road in Paekakariki) has been closed.[3]

In February 2019, we published a report into a collision between a heavy motor vehicle and a freight train at Lambert Rd level crossing near Kawerau in October 2017.[5] We again found that the legislation needs to be clearer on the allocation of responsibility between licensed rail access providers and road controlling authorities for ensuring the safety of rail users and road users at public road level crossings. The Commission made recommendations to the NZ Transport Agency, KiwiRail, and Local Government New Zealand to address matters related to sighting distances and control of vegetation around public road level crossings.

The Commission acknowledges the progress that the NZ Transport Agency and KiwiRail have made towards implementing the recommendations. This includes introduction of a new Level Crossing Safety Impact Assesment Guide developed by the NZTA in collaboration with the wider rail industry and other groups.

We also acknowledge the work being done by NZ Transport Agency, KiwiRail, TrackSAFE NZ and other agencies throughout the country to raise awareness of safe behaviour around the rail network and deliver rail safety campaigns. We are aware that, with nearly 1,400 public road level crossings across the country,[6] full implementation entails considerable resource. The ideal solution — the removal of level crossings — will not always be practical or economically viable. Nevertheless, we consider the predicted increase in road traffic and the expansion of the rail network in metropolitan areas requires a proportionate effort on the part of the responsible authorities to manage the safety risks.

The Commission notes that the Ministry of Transport is leading the development of a new Road Safety Strategy.[7] The Commission welcomes the support that that 2018 Government Policy Statement on Land Transport gives to rail safety, including partnering with KiwiRail to upgrade level crossings.[8]

We will continue to monitor progress in these matters.