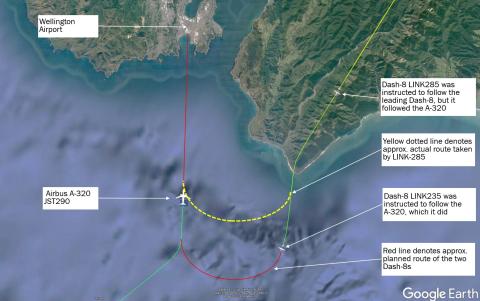 The planned and actual approaches to Wellington by the three aeroplanes. (To aid understanding, this image presents information drawn from diagrams and text in the final report)

In Brief: Two Dash-8s avoided collision on approach to Wellington Airport (saved by human and automated systems) after one Dash-8 followed the wrong lead aircraft. Nobody hurt, no damage. All safety issues are resolved, so no new TAIC recommendations.

Dash-8s on conflicting course: LINK-285 had two planes ahead of it. It misidentified the A320 as the Dash-8, and turned to follow the A-320. This put LINK-285 into a conflicting flight path with LINK-235, too close to LINK-235. An automatic short-term conflict alert warning alerted air traffic controllers that the two Dash-8s might collide.

The Commission found three safety issues: Two concerned procedures for a flight shifting from instrument flight rules to a visual approach to land, and one concerning protection of cockpit voice recordings after an incident:

Following the incident, all operators concerned adequately addressed these safety issues, so there is no need for the Commission to make new safety recommendations.