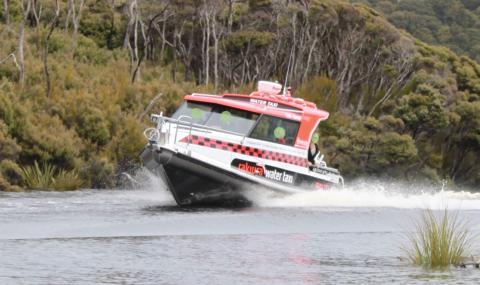 Capsize may be a greater safety risk than skippers and owners of smaller passenger boats think – even with vessel designs perceived to be the safest.

Today’s final report from the Transport Accident Investigation Commission says a water taxi capsized off Stewart Island in September 2019 due to the vessel being less stable than anticipated in the worse-than-expected sea conditions.

The Henerata was crossing Paterson Inlet with the skipper and six passengers on board when worsening weather conditions forced it side-on to the waves. It filled with water and capsized, trapping the passengers inside in an air pocket contaminated with petrol fumes.

The skipper, washed out during the capsize, dived back into the vessel and helped the passengers out, likely saving their lives. All seven clung on to the upturned vessel for about an hour before rescuers arrived. Nobody died, but some suffered hypothermia, swallowed seawater, and required hospital treatment.

The Chief Investigator of Accidents, Harald Hendel, said the Henerata was a ‘pontoon’ design, with a hull structure that included buoyancy chambers.

“This design is well known for buoyancy, but buoyancy is not the same as stability, and capsize is still a hazard that operators and skippers need to plan for,” said Mr Hendel. “So the Commission is calling for designers, manufacturers and marine surveyors to provide better information to help operators and skippers make well-informed decisions about capsize risk.

“To ensure this happens, the Commission has recommended that Maritime New Zealand improve Maritime Rules to require that stability, buoyancy, and survivability assessments be made available for all domestic commercial passenger vessels. Maritime NZ has agreed to do this as part of its wider ongoing reforms.”

“It’s likely the Henerata got into difficulty due to a general expectation that the water taxi service was rarely cancelled and because there was no way to notify these customers about cancellations.

“All owners and skippers of smaller service and recreational vessels need to prioritise safety over passenger expectations when deciding whether to sail, and all safety equipment must be fit for purpose.”

The water taxi operator has responded positively to the safety management system issues with updates to its Maritime Transport Operator Plan and its guidance for skippers to make decisions on when it is safe to sail, including improved and more local sources for weather forecasting.