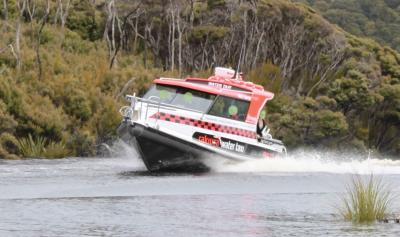 On 12 September 2019, the Henerata was being operated as a water taxi service from
Freshwater Hut to Golden Bay via Paterson Inlet on Stewart Island/Rakiura.

At approximately 1300, the Henerata departed from the Freshwater Hut landing and
travelled down the Freshwater River. There were six passengers and the skipper on
board. At about 1310 the vessel entered Paterson Inlet and the weather conditions
deteriorated. About 10 minutes later the Henerata became swamped and capsized. The
skipper made a Mayday radio broadcast prior to the capsize. The skipper and the
passengers held on to the upturned vessel for about an hour before rescue vessels
arrived.

The passengers and the skipper suffered hypothermia and water ingestion to varying
degrees. Passengers who required hospital treatment were transferred to Southland
Hospital by helicopter. There were no fatalities.

Due to the absence of any communication facilities in the Freshwater River area,
passenger pick-up services from Freshwater Hut were rarely cancelled. It was about as
likely as not that this resulted in a self-perceived pressure to operate the water taxi
service. The operator has since amended its booking information provided to
passengers to notify them that cancellations are possible and that they should be
prepared to stay overnight should cancellations occur.

The operator’s Maritime Transport Operator Plan had no defined weather criteria to
assist the skipper’s decision to sail, nor did it assess the risk of capsize. The
Commission has made a recommendation to the operator to address these issues.
The operator has made several changes to its operations to improve safety should a
capsize occur.

A lack of stability information likely prevented the operator being able to assess fully
the risk of capsize. The Commission has made a recommendation that Maritime New
Zealand ensure that future Maritime Rules require appropriate stability and buoyancy
testing for all domestic commercial passenger vessels.

Maritime operators, regulators, surveyors and boating associations may all benefit
from the findings in this report.
Related Safety Recommendation(s)
013/20
014/20
Location
Stewart Island (-46.934837,168.082978) [may be approximate]