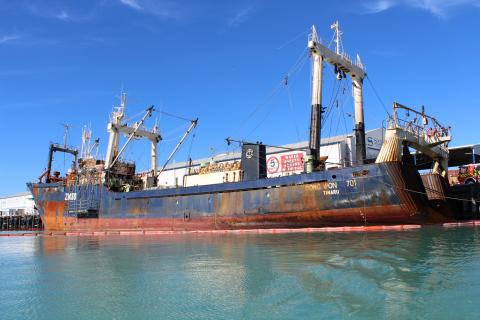 Photo of Dong Won after the fire, including burnt-out accommodation block. TAIC image.

The Transport Accident Investigation Commission has published its Final Report on the fire on the fishing trawler Dong Won in Port of Timaru in 2018.

The Chief Investigator of Accidents, Aron Holman, says the automatic fire alarm did not trigger when fire started at a rubbish bin in the first engineer’s cabin on the officers’ deck.

“When the crew discovered the fire, they didn’t sound the general alarm; their firefighting was inefficient and uncoordinated; and they didn’t follow good industry practice,” said Mr Holman.

“The fire spread quickly because the accommodation space was made of materials that easily caught fire; and this was possible because the Dong Won didn’t have to comply with current structural fire protection standards.”

Out of 63 New Zealand-flagged fishing ships working NZ waters, the Dong Won was one of fifty vessels that entered New Zealand service before 2004. Under the Maritime Rules Part 40D, these vessels only need comply with the standards that applied when they were built, not current standards, and the rules allow them to operate like this indefinitely.

Of the remaining 13 vessels, 12 have been subject to inconsistent application of the Rule, and it is likely some of them do not fully meet the standards.

“On such a vessel, the crew may not be as safe as they would be on a newer vessel constructed to newer standards.

“The Commission has recommended that the Dong Won’s operator minimise the risks and consequences of fire on all its vessels, including firefighting training for crews to immediately sound the ship's general alarm and close all openings to stop air feeding the fire.”

Another recommendation is that Maritime NZ do what they can to make post-2004 fishing vessels comply with as many of the Rule 40D design, construction and equipment standards as is reasonable and practicable.

And TAIC has recommended Maritime Rules be amended to remove the grandfather rights for aging fishing vessels like the Dong Won.