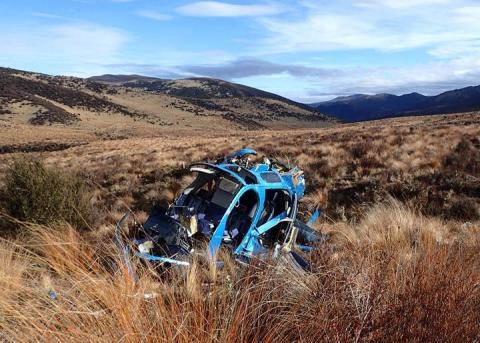 A mystery fuel control fault, combined with a gap in practical training for the pilot in dealing with it, led to a fatal helicopter accident in the Kaimanawa Ranges.
The Transport Accident Investigation Commission’s Final Report, published today, calls for improvements in pilot training.
“Pilot training should include both knowledge and practice in responding to emergencies,” said TAIC’s Chief Investigator of Accidents, Harald Hendel.
“If something goes wrong, the solution should be already in the pilot’s realm of experience, but that wasn’t the case in this accident.”
A pilot and four other occupants were on the flight surveying Ngamatea high country sheep and beef station in the central North Island.
The helicopter’s engine control unit detected faults and automatically switched to a backup mode with fixed fuel flow. When the pilot demanded more power, the engine did not respond. In the subsequent forced landing, the helicopter struck the ground heavily, became airborne again, and hit the ground again. It remained upright with the engine still driving a now-broken main rotor, which caused severe shaking.
“The pilot and occupants were still on board,” said Mr Hendel. “One received fatal injuries; the pilot and one other occupant received serious injuries.
An unknown fault caused the failure of the automated system that controlled engine power. The fault was intermittent, so although it had occurred before, the operator was unable to rectify it.
“The way to deal with this sort of engine control unit failure was for the pilot to switch to manual throttle,” said Mr Hendel.
“The manufacturer’s formal training includes flying with manual throttle, but the pilot did not receive such training in New Zealand, so it’s likely the pilot misunderstood manual mode and emergency procedures and was reluctant to select manual mode.”
The Commission has recommended that the Civil Aviation Authority raise awareness of the importance of pilot type training being sufficiently comprehensive to mitigate any risks presented by particular helicopter characteristics.
The Commission has also recommended that the CAA promote awareness of the benefit of aircraft pilots and occupants wearing appropriate helmets when practicable and when operational conditions indicate a potential benefit.