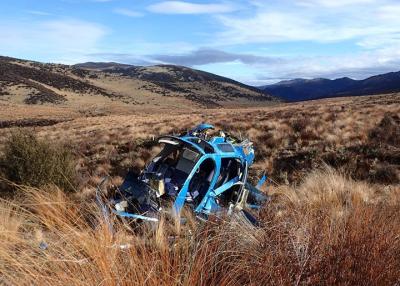 On 14 June 2018, a visual survey flight over Ngamatea Station was being conducted by a pilot with four additional occupants on board an MD Helicopters 600N helicopter.

During the survey flight the helicopter’s electronic engine control unit detected and recorded a number of faults, resulting in the ‘full authority digital engine control’ system changing to ‘fuel flow fixed’ mode. The fuel flow fixed mode resulted in the
rotor speed varying beyond normal operating parameters. The pilot was not able to control the varying rotor speed and a forced landing ensued.

The helicopter struck the ground hard and remained upright, while the engine continued to produce high power. This, combined with an imbalance in the rotor system from the ground impact damage, resulted in a severe shaking of the airframe,
which destroyed the helicopter.

The Transport Accident Investigation Commission (Commission) found that the automatic governing of the engine power failed due to an undetermined intermittent fault. This fault had previously occurred but had not been rectified, likely due to its
intermittent nature. The full authority digital engine control system was not switched to manual mode, which would have allowed the pilot to control the engine power. This was likely influenced by the pilot’s misunderstanding of manual mode and emergency
procedures. The pilot’s misunderstandings were likely due to the local training provided in respect of the engine control system.

The Commission found that local training for the pilot’s type rating did not include an in-flight demonstration of the actions to be taken in the event of an engine control unit failure. This was likely due to the perceived risks associated with this particular
procedure. This likely contributed to the pilot’s reluctance to select the engine control system’s manual mode in flight.

In addition, the Commission found that the pilot and occupants were not wearing helmets throughout the accident flight, likely due to the operator not having a formal policy on the wearing of helmets.

It is well publicised that with the right training and preparation pilots can be ready for any unexpected situation that arises. Instructors can make better decisions when appropriate information for conducting training exercises is available. When this
information is unavailable, misconceptions about the risks involved may prevail. The Commission found that a lack of awareness of the risks associated with in-flight demonstrations of engine control unit failures during training was a safety issue.
Therefore, the Commission recommended that the Director of Civil Aviation publish an educational article raising awareness of the importance of pilot type training being sufficiently comprehensive to mitigate any risks presented by particular helicopter
characteristics.

A key lesson of this inquiry was that a pilot’s technical knowledge and understanding of aircraft systems is essential to their interpretation of and response to malfunctions.