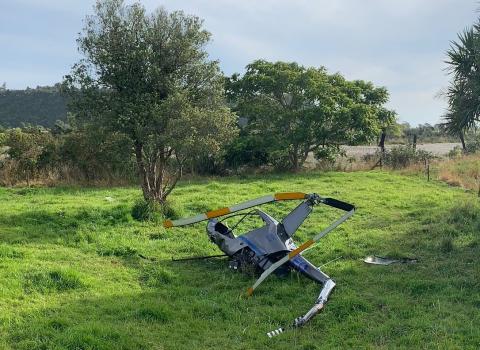 The Transport Accident Investigation Commission (TAIC) is appealing locally for witnesses to the helicopter accident at Karamea on the South Island West Coast today.

The Commission has opened an inquiry into the accident and placed a protection order on the wreckage site, restricting access for the purpose of protecting evidence. People are asked to remain clear of this site.

TAIC is asking for anyone to come forward if they saw the accident or observed the helicopter in flight.

“We’re interested in what locals and holidaymakers may have seen or heard or seen, and we’re particularly keen to receive photographs or videos,” says Harald Hendel, the Chief Investigator of Accidents.

Witnesses should initially use the online form at www.taic.org.nz/contact-us.

“The circumstances reported to TAIC were that the Robinson R22 helicopter was approaching to land when it experienced difficulties, pitched [tipped] down and impacted the ground hard in a paddock adjoining the Karamea River,” said Mr Hendel.

“The pilot, the only person on board, has reportedly suffered serious injuries and been flown to hospital.”

The Commission has appointed a TAIC investigation team of two, who will travel to Karamea on Monday.

"Over the next several days, TAIC’s investigators will gather evidence about the accident scene, secure wreckage and electronic records such as photos, videos, and location data.

“Of course, we’ll be looking at the helicopter wreckage, along with data about it and the history, performance, maintenance, design of this type of aircraft.

“The operating environment is always of interest, including physical, weather, operating company safety system, organisational culture of the operator, and regulatory matters.