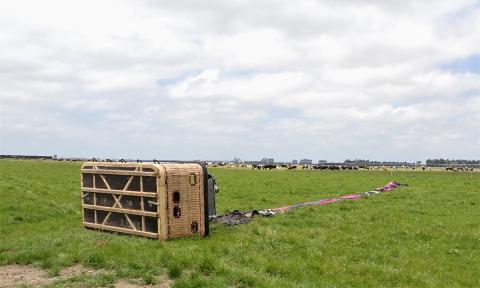 The basket from the 1 January accident

“In both accidents, the balloon became a pilotless aircraft during a heavy landing, out of control at a safety-critical phase of the flight, putting all passengers at risk of injury,” said Mr Hendel

“In both accidents, the pilot wasn’t wearing the installed pilot restraint harness and sustained injuries after ejection from the basket.”

TAIC is issuing its preliminary report at an early stage in both investigations to encourage the commercial ballooning sector to immediately address an urgent matter of transport safety.

Mr Hendel says the Commission’s investigations have revealed an anomaly in the Civil Aviation Rules, which specifically exempt hot air balloon pilots from having to wear harnesses during takeoff and landing.

“Commercial pilots should buckle up for safety-critical phases of flight, and every balloon basket should be fitted with a pilot restraint harness.”

The most recent accident occurred on New Year’s Day when a balloon was landing in a field near Methven in Canterbury with a pilot and seven passengers on board. The basket landed hard, tipped over and dragged about 35 metres across the field before coming to rest.

The passengers were uninjured, and the balloon undamaged. But in the process the pilot was ejected and seriously injured with a balloon rope caught around the neck.

In an earlier accident near Arrowtown in Otago in July 2021, a balloon with pilot and ten passengers struck the ground on landing, ejecting the pilot who sustained moderate injuries.

A TAIC preliminary report does not include a full narrative, analysis of the facts, formal findings or (necessarily) all recommendations. All of that will be included in a final report to be issued by the Commission upon completion of the inquiry.

The principal purpose of the Transport Accident Investigation Commission is to determine the circumstances and causes of aviation, marine, and rail accidents and incidents with a view to avoiding similar occurrences in the future, rather than to ascribe blame to any person.

TAIC opens an inquiry when it believes the reported circumstances of an accident or incident have - or are likely to have - significant implications for transport safety, or when the inquiry may allow the Commission to make findings or recommendations to improve transport safety.