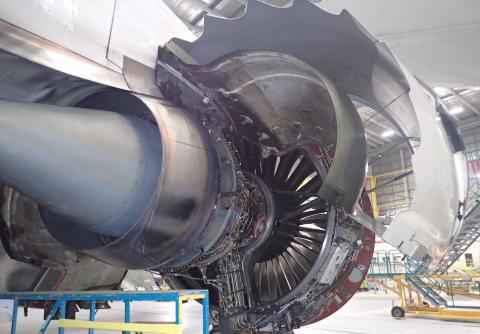 One of the engines, opened for inspection | TAIC photo

Deputy Chief Commissioner Stephen Davies Howard says the Commission resolved its inquiries because it was satisfied that engine manufacturer Rolls-Royce had addressed the salient safety issues identified in TAIC’s Interim Report published in May 2018.

“The Commission resolved that further lines of inquiry would be unlikely to identify further circumstances with significant implications for transport safety; or to enable us to make further findings or recommendations for safer transport in future,” said Mr Davies Howard.

In each incident, a turbine blade in the engine’s intermediate-pressure turbine (IPT) fractured and broke off due to corrosion fatigue cracking caused by a combination of blade design or construction, engine operation and contaminants in the air. On the Tokyo flight, the broken blade significantly damaged the engine and small pieces of ejected metal struck (without significantly damaging) the tailplane, wing and fuselage. On the Buenos Aires flight the damage was mainly confined to the engine.

“The Commission’s early investigations prompted Rolls-Royce to improve its system for forecasting when the fatigue might happen,” said Mr Davies Howard.

“By the time we published our Interim Report, Rolls-Royce was already replacing affected IPT blades with a new design that used an established alloy with protective coating. They have now replaced the affected turbine blades in 99% of the global flying fleet.

“These actions by the engine manufacturer were sufficient to address the safety issues.”