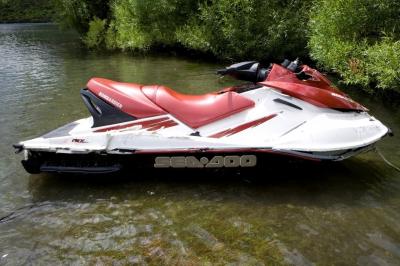 Personal watercraft Sea-Doo GTX 155 post accident. Courtesy of New Zealand Police .
Collision: private jet-boat/private watercraft, Kawarau River, Queenstown, 5 January 2009
Status
Closed
Occurrence Date
5 Jan 2009
Report Publication Date
24 Mar 2011
Jurisdiction
NZ
Legacy Inquiry Number
09-201
At about 1924 hours on 5 January 2009, a recreational jet-boat and personal watercraft collided almost head-on at high speed close to willow trees near the bank of the Kawarau River, Queenstown.
None of the 3 persons on the jet-boat was wearing a lifejacket2, so when the driver and front-seat passenger were ejected from the boat in the collision and probably rendered unconscious, they drowned. The third person received minor injuries.
The driver of the personal watercraft and his passenger were both wearing lifejackets and despite the passenger being knocked unconscious and being critically injured, she survived. The driver was also seriously injured. Both craft were extensively damaged and declared total constructive losses.
Speed was one of 2 main proximate causes of the collision. Both craft were travelling on the Kawarau River in an area where the speed limit of 5 knots within 200 m of the shore had been uplifted through a Council resolution, but neither vessel was travelling at a safe speed as required by Maritime Rules Part 22, Collision Prevention, because both craft were nearing a clump of willow trees that obstructed their view of any other craft or persons permitted to be in that area at the time. The second main proximate cause was the jet- boat's travelling at speed on the wrong side of the river at the time of the collision.
The report discusses the general issue of recreational boat users not being required to demonstrate an in-depth knowledge of the collision-prevention rules; knowledge that could have made both drivers more aware of their responsibilities to travel at a safe speed at all times, regardless of any uplifting of speed restrictions.
Lifejackets save lives and would likely have prevented the deaths of the 2 jet-boat occupants in this case. The report discusses the requirement or otherwise to wear lifejackets in craft under 6 m in length. The Transport Accident Investigation Commission (Commission) does not make a recommendation to address this issue because recent educational programmes have had some success in this area, and some local government authorities have mandated wearing lifejackets in small craft. In other areas the wearing of lifejackets is left to the discretion of the person in charge of the boat.
One of the drivers had consumed a small quantity of alcohol prior to the collision, but probably not enough to impair his performance. Nevertheless, the Commission has looked at the available statistics on alcohol and fatal boating accidents and discusses recreational boating and alcohol, and the relationship between this and the licensing of recreational boat users.
The personal watercraft was travelling at an unsafe speed at the time of the collision because of its close proximity to the willow trees. The Commission has determined that commercial jet-boats routinely followed similar lines at unsafe speeds. The report discusses how the routine commercial jet-boat operations on the Kawarau River conflict with the requirement for all craft to travel at safe speeds, and how commercial jet-boat drivers, like recreational boat drivers, are not required by Maritime Rules to hold Maritime Documents that require them to have demonstrated an in-depth understanding of the collision-prevention rules.
The discussion of commercial jet-boat operations and the uplifting of speed restrictions leads to an issue of whether adequate protections had been put in place to mitigate the risk to river users where a speed restriction had been uplifted, a restriction that had been put in place to protect other people engaging in leisure activities around shorelines from craft travelling at high speed.

- the process for uplifting speed restrictions is inconsistent and there is a lack of a formal assessment of the risks created in doing so
- neither recreational boat users nor commercial jet-boat drivers are required to demonstrate knowledge of the collision-prevention rules
- there are no limits for alcohol and other performance-impairing substances for recreational and commercial boat drivers, and no legal mechanism to test them for alcohol and other performance-impairing substances
- there is a lack of mandatory requirements for head protection on personal watercraft and other craft involved in high-risk activities.
Related Safety Recommendation(s)
002/11
003/11
004/11
005/11
006/11
007/11
Location
Queenstown (-45.030469,168.751760) [may be approximate]