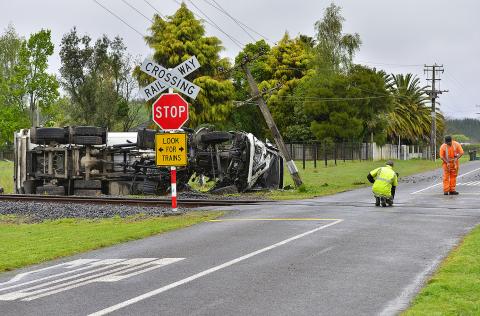 The Transport Accident Investigation Commission has published its report into a fatal accident involving an empty log train and a refuse collection truck at a level crossing near Kawerau in October 2017.

The truck driver died in the accident and the truck was significantly damaged.

Chief Investigator of Accidents, Captain Tim Burfoot, says the truck very likely did not stop at the stop signs.

“The truck entered the crossing at about 48 kilometres per hour and the train struck it at over 60,” said Capt. Burfoot.

The Commission found no issues with how the train was being driven and no technical issues with the truck that could have contributed to the accident. The level crossing was well signposted.

The Commission did find an issue with sight lines. It found that even the truck had stopped, the view was insufficient for driver the truck to clear the level crossing from a stop if a train had been just out of view.

The Commission discovered that New Zealand legislation is unclear on the responsibilities of licensed rail access providers and road controlling authorities for ensuring the safety of road and rail users at public road level crossings.

TAIC made four recommendations focussed on the long term need to clarify the legislation on responsibility for sight lines in the rail corridor; and the short term need for licensed rail access providers and road controlling authorities to work together to ensure good sight lines at level crossings.

“Whatever happens in terms of responses to the Commission’s recommendations, road users must always approach railway level crossings with extreme care,” said Capt. Burfoot, “particularly those level crossings that just have Give Way or Stop signs.”

“And finally, as always, wearing a seatbelt increases the chance of surviving an accident.”