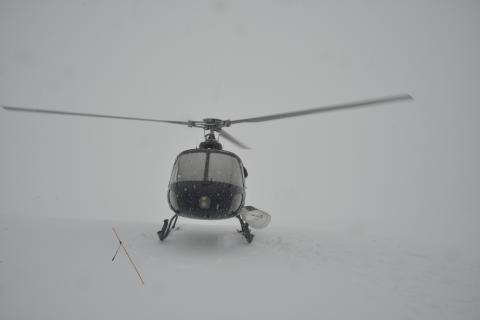 PHOTO - the helicopter parked on Chancellor Shelf above Fox Glacier

The Transport Accident Investigation Commission has published its final report on the crash of an AS350BA helicopter on Fox Glacier, which took the lives of all seven people on board in November 2015.

Searchers found its wreckage on the glacier after the scenic flight was reported overdue on 21 November 2015.

TAIC Chief Commissioner Jane Meares says the helicopter operator’s pilot training system did not fully comply with Civil Aviation rules and did not adequately prepare the pilot for their role and responsibilities.

“The Civil Aviation Authority identified significant non-compliances with the operator’s training system and with managerial oversight prior to the accident. However, the CAA did not intervene and the operator was allowed to continue providing helicopter air operations,” said Ms Meares.

TAIC highlighted the need to correct recurrent deficiencies well before the Fox Glacier accident, following a different inquiry. In 2014, the Commission recommended that when an audit identifies a serious safety issue; the CAA should always make a formal finding and require air operators to correct deficiencies. To this end, the CAA notified TAIC of numerous policy changes and improved training for inspectors. Despite this, CAA inspectors overlooked and did not raise findings on significant non-compliances with Civil Aviation rules in the case of the operator of the Fox Glacier accident helicopter.

“The Commission is concerned that there could be a wider safety issue whereby other civil aviation operators during the same period could have significant non-compliances that were not identified or not resolved,” said Ms Meares.

“To address this, the Commission recommended in February this year that the CAA independently review its past surveillance activities. The Commission’s report details the CAA’s positive response, including appointing PWC to conduct the review; alongside continuing improvements to its regulatory oversight.

The Commission opens an inquiry when it believes the circumstances of an accident or incident have - or are likely to have - significant implications for transport safety, or when the inquiry may allow the Commission to make findings or recommendations to improve transport safety.