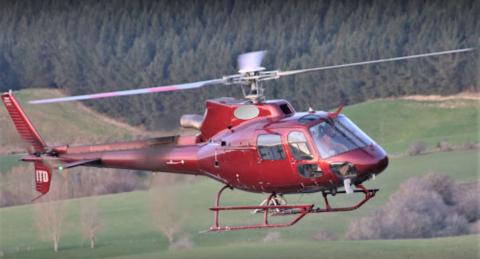 The accident helicopter photographed in 2019

The Transport Accident Investigation Commission has opened an inquiry into an accident involving an Eurocopter ‘Squirrel’ AS350 helicopter.

Harald Hendel, the Chief Investigator of Accidents, says the circumstances reported were that the helicopter impacted terrain in the Lammerlaw Range above the Waipori River, about 10 km North of Lawrence in Otago at about 5:30am on Thursday 16 September 2021.

“We have been informed that there was one fatality in this accident -- the pilot, who was the only person on board.

“TAIC is appealing for any witnesses,” said Mr Hendel. “We are keen to hear from people who saw the accident or who saw or heard the helicopter on this early morning flight between Milton and the Lammerlaw Range – particularly if you have photographed or captured the flight on video”

The Commission has appointed a TAIC investigation team of three, who anticipate getting to the accident site tomorrow morning [eds: 17 September].

"The Investigation team’s immediate evidence collection work is broad to support all avenues of inquiry. The initial focus is on gathering evidence that could disappear or change, such as the effect of weather on the wreckage.

To preserve the evidence, the Commission has issued a Protection Order, prohibiting unauthorised access within a 200 metre radius of the main wreckage and/or unauthorised handling of any other wreckage or evidence relating to this accident. “Over the coming days and weeks, TAIC’s investigators will be recording the accident scene, recovering any remaining wreckage, securing electronic records – including photos, videos, and location data – and interviewing witnesses.

“We’re interested in what people have to say, of course, particularly the helicopter’s operator, and relevant professional and personal backgrounds of operational staff, what they knew, thought, experienced, and did.

“We’ll be considering the helicopter itself, its individual and type history, performance and maintenance.

“The operating environment is also of interest, extending beyond the terrain and weather, to the operating company safety system, organisational culture, and regulatory matters.

Correction: (1 October) Corrected this text to show time of accident as about 5:30am rather than the 6:20am that we originally reported.