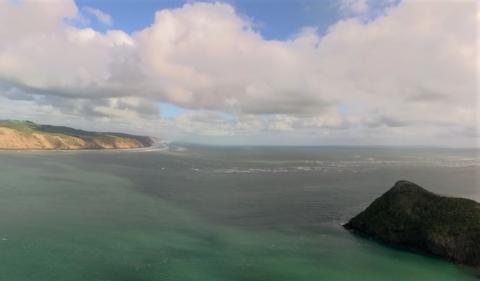 Photo of the Manukau Bar taken from atop the Whatipu Coast Walk. Photo credit Maxim Voronin

The Transport Accident Investigation Commission is appealing for witnesses who saw, photographed or videoed a boating accident at the entrance to Manukau Harbour on the afternoon of Saturday October 16.

Harald Hendel, the Chief Investigator of Accidents, says the Commission has opened an inquiry into the fatal accident involving a recreational boat that reportedly got into trouble near the Manukau Harbour bar between about 4pm and 5pm.

“The circumstances reported were that the boat capsized,” said Mr Hendel. “We don’t yet know what happened next, but we have heard that other boaties found three deceased persons in the water and, fortunately, rescued a fourth.”

“TAIC is appealing for any witnesses,” said Mr Hendel. “Getting the facts straight is vital, so we’re keen to hear as soon as possible from people who saw the accident or observed the boat at any time in its journey. Details of the boat involved are not known at this stage and this is where witness accounts may help – particularly if you have photographs or videos.

The Commission has appointed a dedicated investigation team of two, who will be travelling to Auckland on Monday morning.

"The team’s evidence collection work is broad at first to support the many routes that an investigation could follow. The initial focus is on gathering evidence that could disappear or change – not just flotsam and jetsum, but also memories while they’re fresh in people’s minds.”

“Over the next several days, TAIC’s investigators will be seeking and recovering any wreckage where possible, securing electronic records – including photos, videos, and location data on people’s cellphones – and interviewing witnesses.

“We’re interested in what people have to say, of course, particularly the survivor, but also what the families and friends of the crew knew about their plans for the trip. And we’re keen to find out more about the boat, its individual and type history, performance, maintenance, equipment and design.