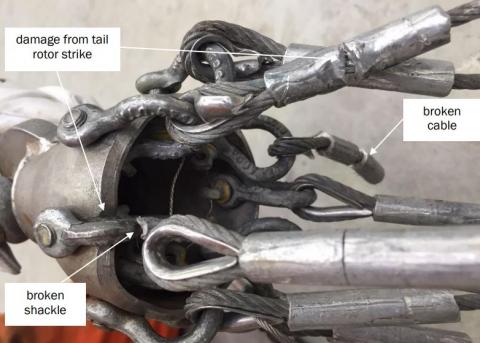 On the afternoon of 13 February 2017 wildfires broke out on the Port Hills between Lyttelton Harbour and south-eastern suburbs of Christchurch.  A major effort began early the following day to control the fires, using large ground parties assisted by up to 12 helicopters and two aeroplanes.  In the early afternoon, one of the helicopters, a Eurocopter AS350 ‘Squirrel’ registered ZK-HKW, crashed while the pilot was returning to the dipping pond to refill the firefighting ‘monsoon’ bucket.  The helicopter was destroyed and the pilot was killed.

Evidence shows that the likely cause of the crash was the empty monsoon bucket swung back into the tail rotor, damaging the tail rotor and causing the loss of the vertical stabiliser from the tail boom.

After the loss of the vertical stabiliser, the helicopter gradually rolled to the right and descended until it struck the ground.

Underslung loads flying back into the tail rotor is a known risk for helicopter sling operations and there is useful advice available for pilots and operators to help prevent these types of accidents.

The Commission has recommended the Director of Civil Aviation as a matter of urgency, disseminate to industry the lessons learned from accidents involving sling loads, in particular the use of monsoon buckets.