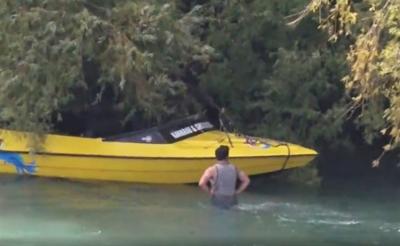 The accident jet boat at the site of the accident. | Photo - TVNZ
Jet boat KJet 8, loss of control, Shotover River, Queenstown, 21 March 2021
Status
Closed
Occurrence Date
21 Mar 2021
Report Publication Date
19 May 2022
Jurisdiction
NZ
What happened
On 21 March 2021, the jet boat KJet 8 (figure 1) was travelling on the Shotover River (figure 2) with a driver and 12 passengers on board. As it rounded a right-hand bend the engine stopped and as a result the driver lost control of the jet boat.

It continued moving forward under its own momentum and collided with a low overhanging branch of a tree on the bank of the river.

The driver and one passenger were struck on the head by an overhanging branch and received moderate head injuries. They were airlifted to hospital and discharged the same day.

As a consequence of the engine stopping, propulsion and steering was lost, and the driver was unable to control the jet boat.

Examination of the failed fuse showed that it is virtually certain the fuse failed as a result of mechanical fatigue caused by vibration. The fuse and its connections into the main fuse box were replaced and the engine started and operated successfully.

The cause of the accident was a single point of failure in a critical jet boat control system, which resulted in total loss of control of the jet boat. The single point of failure had not been identified by the operator as part of a risk mitigation process and therefore the Commission has made a recommendation to the Director of Maritime New Zealand (MNZ) that:
They engage with operators working under Maritime Rules Part 82 to identify jet boat systems which carry the risk of single point failure that would result in a total loss of control of the jet boat, and discuss possible measures that could be taken to reduce the risk to passengers and crew to as low as reasonably practicable.

What we can learn
To prevent similar component failures in the future requires that an operator conducts a thorough and robust assessment of a jet boat operating system and identifies appropriate mitigation measures. Specifically, in relation to this incident by ensuring that the flexing of wires cannot apply a mechanical load to the fuses and that fuse boxes are mounted in such a way that they are not subject to the direct vibration of something as significant as an engine.