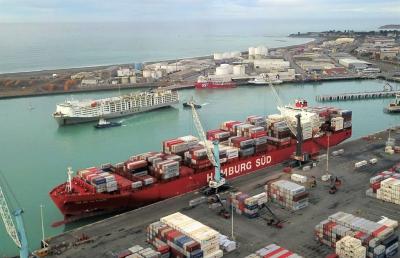 Rio De La Plata alongside at Prime Port, Timaru | Photo: John Bisset
Container Vessel, Rio De La Plata, serious injury to crew member during unmooring operations, Timaru Port, 14 November 2020
Status
Closed
Occurrence Date
14 Nov 2020
Report Publication Date
26 May 2022
Jurisdiction
NZ
What happened
On the morning of 14 November 2020, the container ship Rio De La Plata was preparing for departure from the Port of Timaru after completing cargo operations. Three crew members had just commenced unmooring operations at the forward mooring deck when one of them got caught in a rope that was being retrieved. The rope dragged the crew member into the mooring winch, resulting in serious injuries to their hand and face.

Why it happened
It is likely that the crew member, completely engaged in communicating with the winch operator and handling the rope, had reduced situational awareness of their own safety. As a result, they stepped too close to the mooring winch and became trapped between the rope and the winch drum.

The person in charge of the forward mooring party was also operating the winch. This very likely increased the risk of an accident because they no longer had a clear view of the entire operation and their ability to monitor the actions of others was reduced.

The crew had not identified the need to change the unmooring plan to address new risks created by a reduction in crewing available on the forward mooring deck.

The forward mooring party had not sufficiently planned the unmooring operations to mitigate the risk of crew members operating in blind spots, which increased the risk to crew working in close proximity to the mooring winch and in the blind spot of the winch operator.

The safe job analysis undertaken by the crew deviated several times from the intent of the safety management system because there were several control measures that were lacking or did not sufficiently mitigate the risks identified.

The transverse bars running across the mooring winch should have been removed after the winch was installed on the forward deck because it reduced the clearance available between the storage drum and deck and increased the risk of the rope getting stuck at the bar.

Equipment on board ships must be installed and operated as intended by the manufacturer. Any deviation from the manufacturer’s recommendation can increase the risk of serious injury.

It is important that the person in a supervisory role remains an observer and does not take part in the actual work or handling operation.

Risk assessments are only effective if realistic control measures are put in place to mitigate the hazards that have been identified. The control measures then need to be implemented correctly to reduce the risk to as low as possible.

Who may benefit
The ship’s crew and the crews from other vessels in the fleet, the vessel owners and operators, maritime training facilities and shore-based emergency response agencies may all benefit from the findings in this report.

The ship’s crew and the crews from other vessels and vessel owners and operators operating similar winches on their vessels.