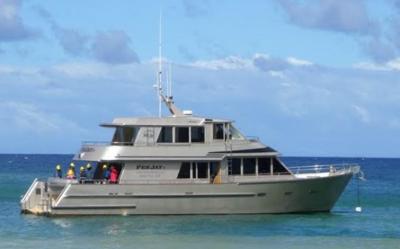 The Pee Jay V. Photo supplied
Restricted-limits passenger vessel the PeeJay V, Fire and sinking , 18 January 2016
Status
Closed
Occurrence Date
18 Jan 2016
Report Publication Date
25 Jan 2018
Jurisdiction
NZ
On 18 January 2016, the restricted-limits passenger vessel PeeJay V was on an all-day excursion from Whakatāne out to White Island with 53 passengers and seven crew on board. The PeeJay V was near the end of the journey and approaching the Whakatāne Harbour entrance when fire broke out in the engine room.

The crew released the fixed CO2 fire extinguisher into the engine room, which suppressed the fire for a short time. However, the fire quickly escalated, forcing the skipper to order everyone to abandon the vessel. Several vessels in the vicinity responded to the skipper’s distress call. All persons were eventually transferred to the assisting vessels. However, due to the speed with which the fire gained intensity several passengers were forced to enter the water without a life-jacket.

The crew were not able to access all of the life-jackets on board because of the fire. For the same reason they were not able to launch the flotation raft that was stored on top of the vessel’s flybridge.

The PeeJay V burnt to the waterline and sank. One crew member suffered from smoke inhalation, but otherwise nobody else was seriously injured.

Due to the lack of physical evidence to work with, the Commission was unable to conclusively establish the cause of the fire. The Commission found that the absence of a fire detection and automatic alarm system on the PeeJay V meant the crew had limited warning time and opportunity to respond to the fire and prepare the life-saving apparatus.

The Commission also found that the CO2 fire suppression system, which was supposed to work by displacing the air in the engine room with CO2, was not effective in suppressing the fire. This was because air was able to enter the engine room through several openings, including a cable duct that had no means of being closed.

The Commission also found that the placement of the life-saving apparel and equipment on board was appropriate. The fact that it could not all be accessed highlights the difficulty operators of smaller vessels have in choosing where to locate such equipment.

Three main safety issues identified during the inquiry were:
- Maritime Rules did not require the PeeJay V to have fire detection or automatic fire alarms installed even though it could carry up to 90 passengers and operate up to 12 nautical miles from the coast
- the CO2 fixed fire-fighting system installed in the engine room could not be fully effective in extinguishing the fire because the space it was protecting could not be fully closed down
- the builder and operators of the vessel did not fully appreciate the principles of how the CO2 fixed fire-fighting system operated.

The Commission made one new recommendation and invited the Director of Maritime New Zealand to implement an existing previous recommendation to address these safety issues.

The key lessons arising from this inquiry are:
- early detection of a fire on board a vessel is critical to a successful fire-fighting response and for the early preparation of life-saving apparel and equipment
- crew must be fully familiar with and trained in the use of fire-fighting systems on board, otherwise the systems might not be of any use in fighting a fire
- even if a fixed CO2 fire-fighting apparatus is fully functional, it will only be effective in fighting a fire if the design of the space it is protecting can be fully closed off.
Related Safety Recommendation(s)
035/17
Location
Whakatane (-37.919166,177.001388) [may be approximate]