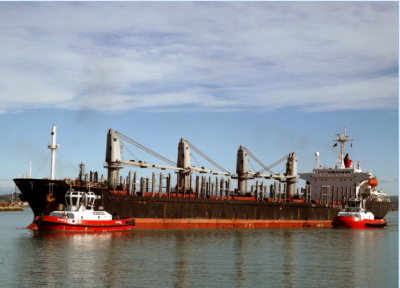 The IDAS Bulker entering Napier Harbour. Courtesy of Tony Des Landes.
Bulk carrier, IDAS Bulker, pilotage incident Napier, Hawke's Bay, 8 August 2013
Status
Closed
Occurrence Date
8 Aug 2013
Report Publication Date
15 May 2014
Jurisdiction
NZ
On 8 August 2013 the IDAS Bulker was departing Napier with a full cargo of logs. The vessel was initially under the control of a Napier pilot, who relinquished control of the vessel to the master approximately abeam South Pania Buoy (while still in the pilotage area) and departed the vessel.

The master of the IDAS Bulker was concerned that the course that the pilot had advised him to steer would bring the IDAS Bulker too close to another vessel that was inbound to the Napier pilot station.

The master and the navigating officer of the IDAS Bulker, after looking at the navigational chart, noted that the IDAS Bulker could safely pass to the south of North Pania Buoy, north of Pania Reef, and increase the passing distance between the 2 vessels.

The master ordered the course to be changed to pass south of the buoy. The pilot on the pilot vessel heading towards the inbound ship noticed that the IDAS Bulker had changed course and contacted the master. The pilot advised the master that he was heading into danger and to alter course so as to pass to the north of North Pania Buoy.

The master initially accepted and complied with the pilot's advice, but after re-checking the chart altered course back to the south and passed safely clear of the buoy and the inbound ship.

The Transport Accident Investigation Commission (Commission) made the following findings:
- the course taken by the IDAS Bulker did not place the vessel in actual danger of grounding
- when the pilot handed control of the navigation of the vessel back to the master, the master was placed in the position of navigating his vessel within a pilotage area in contravention of the Maritime Rules
- the procedures used by Napier pilots as contained in Port of Napier Limited's Outward Pilotage procedures have not been aligned with the appropriate rules and legislation since 2003
- no-one in Hawke's Bay Regional Council or the Port Authority and none of the pilots themselves realised that the procedures for outward pilotage were in error. The pilotage areas marked on the navigational charts and contained in nautical publications did not align with Maritime Rules and the Regional Council's Navigation Safety Bylaws.

The Commission made the following recommendation:
- to the Chief Executive of Hawke’s Bay Regional Council that the harbourmaster ensure that the Maritime Rules and Bylaws for piloting vessels within the Napier Pilotage Area are followed. Further, that the markings on and content in nautical publications such as, but not limited to, charts, Admiralty Sailing Directions and Admiralty Lists of Radio Signals are accurate in describing the areas and procedures for pilotage within Hawke’s Bay Regional Council’s areas of responsibility.

The key lesson learnt from the inquiry into this occurrence was:
- organisations need to ensure that they have compliance monitoring systems that detect changing regulatory requirements and that their policies and practices remain consistent with these.
Related Safety Recommendation(s)
007/14
Location
Pania Reef (-39.433300,176.955000) [may be approximate]