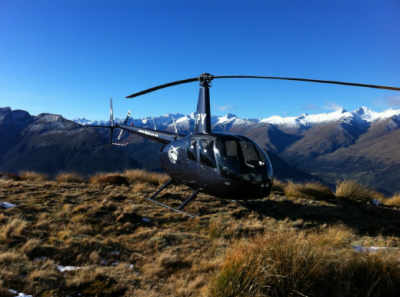 R44 Raven II ZK-IPY. Courtesy of Over The Top.
Mast bump and in-flight break-up, Robinson R44, ZK-IPY, Lochy River, near Queenstown, 19 February 2015
Status
Closed
Occurrence Date
19 Feb 2015
Report Publication Date
25 Aug 2016
Jurisdiction
NZ
On 19 February 2015, a Robinson R44 helicopter was returning to Queenstown from a training flight when it broke up in mid-air and crashed in bush near the Lochy River, killing the instructor and student.

Mast bumping is typically caused by one or a combination of the following factors:
- low main rotor revolutions per minute (RPM)
- the helicopter entering a low-Gravity (low-G) condition (where the occupants might get the feeling of lightness or weightlessness)
- turbulence
- the pilot making large and abrupt movements with the helicopter controls.

The Transport Accident Investigation Commission (Commission) could not conclusively determine what caused the mast bumping event. We found that it was unlikely to have been a low main rotor RPM event and could find no mechanical defect or failure that could have contributed to the accident.

Although the weather was generally calm and suitable for the training flight, it was about as likely as not that there were pockets of light to moderate turbulence in the area. Light to moderate turbulence should not on its own cause mast bumping, but when combined with a relatively high speed and a pilot's control response to any turbulence, there is a high risk of the helicopter entering a low-G condition, rolling rapidly to the right and suffering a mast bump event before the pilot can react.

The Commission comments on the safety issue whereby the true causes of mast bumping and in-flight break-ups are often not able to be determined because the accidents are usually fatal and the consequent destructive nature of the accidents makes it difficult to either eliminate or confirm mechanical failure as a cause.

The Commission has made a recommendation to the Secretary for Transport and given notice to the Director of the New Zealand Civil Aviation Authority to promote, through the appropriate International Civil Aviation Organisation forum, the need for cockpit video recorders and/or other forms of data capture in the cockpits of certain classes of helicopter to address this safety issue.

The key lesson arising from this inquiry is that helicopter pilots must be fully aware that a condition of low-G (feeling of lightness or weightlessness) can result in: a rapid right roll; mast bumping; and in-flight break-up before even the most experienced pilot can react and recover the situation. Pilots need to fly in a manner that avoids low-G conditions rather than allow them to develop and then expect that they can recover from them.
Related Safety Recommendation(s)
014/16
015/16
Location
Queenstown (-45.185800,168.595000) [may be approximate]