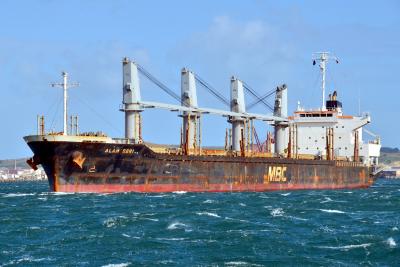 On 28 November 2018, the Alam Seri was entering Bluff Harbour in a strong east-south-easterly wind under the conduct of a harbour pilot. Near the end of Number 1 Reach the vessel had to make a turn to port into Number 2 Reach. To achieve this the pilot ordered a succession of helm orders, and at about the same time ordered the engine speed to be reduced from half ahead to slow ahead.

Shortly after entering Number 2 Reach the vessel began to veer off course to starboard, despite the helmsman applying full port rudder. The pilot ordered the engine speed to be increased to half ahead again to provide better steering control, and called for early assistance from two harbour tugs that were routinely waiting ahead to assist. However, concerned about the decreasing available safe water, the pilot then ordered the engine to be set to full astern and asked the crew to deploy both anchors. The crew were not able to deploy either anchor in time to provide assistance.

The Alam Seri was brought under control using astern engine power and the assistance of the two tugs, but not before momentarily making contact with the seabed near the Inner Davey beacon. Both tugs were damaged during the event and their towlines parted1 while bringing the Alam Seri under control.

The strong east-south-easterly wind, acting on the starboard side of the ship, was creating a strong starboard turning moment that could not be countered by the application of full port rudder. The resulting turning moment to starboard produced by the wind on the accommodation block exceeded the steering capability produced by water flow over the rudder when the engine was reduced from half to slow ahead.

The delayed deployment of the anchors likely resulted in the vessel not stopping as soon as it could have, although it is uncertain whether the anchors would have prevented the ship from contacting the seabed if they were deployed when ordered.

The bridge team did not have a shared understanding of the manoeuvring capabilities of the vessel in the weather conditions at the time, or of how the planned turn from Number 1 to Number 2 Reach would be achieved in the east-south-east conditions.

The absence of electronic charting and information aids on the Alam Seri likely reduced the bridge team’s situational awareness, particularly during the manoeuvres to regain the channel following the incident.

Successful ship-handling and manoeuvring centres on balancing the forces acting on the vessel. On this occasion the bridge team did not share a common understanding with the pilot of how the reduction in engine speed and the relative wind speed and direction would affect the vessel’s steering capability.

Manoeuvring actions and outcomes should be discussed during the master-pilot exchange and the bridge team should agree on defined parameters for monitoring and initiating a challenge.

When safety-critical equipment, such as an anchor, is required to be available for immediate use in the event of an emergency, any factors affecting its immediate use should be communicated and discussed during the master-pilot exchange.
Related Safety Recommendation(s)
001/21
Location
Port of Bluff (-46.593440,168.349478) [may be approximate]