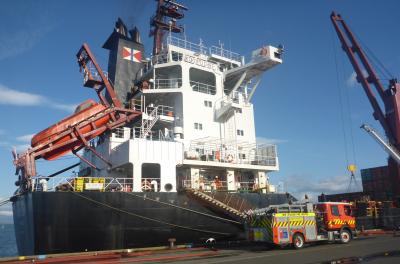 Number 4 cargo hold was completed with tiers of packaged timber, after which the hatch lid was closed and containers loaded on top. Cargo operations were completed by about 2230 and the crew stood down to rest before the vessel’s departure, which was scheduled for early the next morning.

Shortly before midnight the ship’s smoke-detection system alarmed, alerting the crew to a fire that had broken out in number 4 cargo hold. The crew response to the fire included activating the ship’s fixed carbon dioxide (CO2) fire-extinguishing system, which involved sealing the cargo hold and releasing liquid CO2 into the cargo hold.

The master alerted harbour control, which called the local fire service, responded and combined with the ship’s crew to form a joint fire command team and a fire control team. The fire control team monitored the temperatures of the steel surfaces around the cargo hold, which indicated that the fire was being suppressed by the CO2 gas in the hold.

A decision was made to unload the containers on top of the hatch and partially open one of the lids. However, smoke was emitted from under the hatch lid, so it was replaced and any remaining bottles of liquid CO2 were released into the cargo hold.

After several hours the temperatures had decreased, so the hatch lid was removed. There were no obvious signs of fire, so the timber packs were unloaded and any remaining hot spots attended to.

The Transport Accident Investigation Commission (Commission) found that the fire was caused by heat radiating from an incandescent reflector lamp that set fire to packs of timber that had been stowed close to the lamp. The cargo hold lights had not been switched off on completion of loading.

The Commission also found that the ship’s fixed CO2 fire-extinguishing system was effective, but that the fire could have been extinguished sooner if the hatch had not been opened earlier.

The Commission also found that the response to the fire was well co-ordinated, but identified the following safety issues:
- the operator’s safety management system had not fully mitigated the risk of fire caused by cargo hold lighting, in spite of an earlier incident involving similar circumstances
- the responsibilities of the various authorities involved in responding to the fire were not clearly documented and understood by all parties
- the Fire and Emergency New Zealand training standards did not fully cover the special considerations for responding to shipboard fires.

The operator took a number of safety actions to address the first safety issue. The Commission made two recommendations to Fire and Emergency New Zealand to address the other safety issues. The Commission also made recommendations to the International Association of Classification Societies and the International Group of P&I Clubs to disseminate the lessons learned from this accident to the global shipping fleet.

Key lessons arising from this inquiry included:
- safety procedures such as switching off cargo hold lights should be documented and include systems for checking that they have been carried out
- some lamp types generate a substantial amount of heat that can be a fire hazard. Ship owners and operators should consider using other types of lamp that do not generate high heat in locations where the risk of fire is present
- the required firefighting systems on board ships are unique to the special design and construction of the ships. When possible, they should be fully utilised in accordance with the operating instructions.
Related Safety Recommendation(s)
023/18
024/18
025/18
026/18
Location
Port of Tauranga (-37.645555,176.181666) [may be approximate]