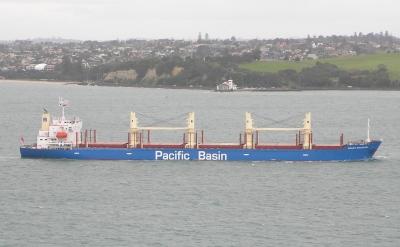 The bulk carrier Mount Hikurangi. Credit -.
Bulk log carrier Mount Hikurangi, Crew fatality during cargo securing operation, 27 February 2016
Status
Closed
Occurrence Date
27 Feb 2016
Report Publication Date
1 Dec 2016
Jurisdiction
NZ
On 27 February 2016, the bulk carrier Mount Hikurangi had just completed loading a cargo of logs at the port of Tauranga. The ship's crew were involved in applying chain lashings to the logs that had been loaded above deck when a deck cadet fell from the stack of logs 10 metres onto the wharf below, then into the sea. The deck cadet did not survive this fall. His body was recovered by divers a number of hours later.

The deck cadet was not wearing a safety harness attached to a fall arrestor while working close to the edge of the log stack, despite a company requirement to do so.

The Transport Accident Investigation Commission (Commission) found that the crew on Mount Hikurangi routinely did not follow company procedures by working on top of log cargoes without the required safety harnesses.

The Commission also found that there was little evidence of a strong safety culture on board Mount Hikurangi at the time.

The safety actions taken by the ship operator and Maritime New Zealand negated the need for the Commission to make any recommendations.

Key lessons arising from the inquiry include:
- all crew members must wear safety harnesses, preferably connected to fall arrestors, when working at height
- a strong safety culture must be established and promoted from the highest levels of management on board a ship. It must be encouraged, monitored and enforced throughout all levels of the organisation so that best safety practices are followed.
Location
Port of Tauranga (-37.644762,176.181221) [may be approximate]