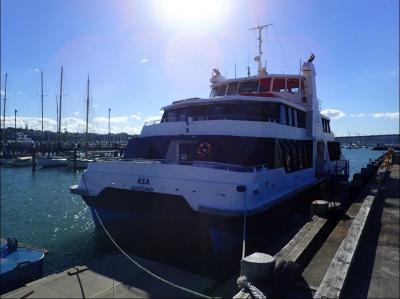 Passenger ferry Kea at Auckland. Credit TAIC
Passenger ferry Kea, collision with Victoria Wharf, Devonport, 17 February 2015
Status
Closed
Occurrence Date
17 Feb 2015
Report Publication Date
28 Sep 2017
Jurisdiction
NZ
The Kea was a double-ended catamaran passenger ferry operating a 15 minute service between downtown Auckland and Devonport on Auckland's North Shore. The vessel was fitted with a propulsion unit on the forward end of the starboard hull and the aft end of the port hull and could be operated from the centre and starboard side of the wheelhouse. The entire control system for the propulsion units had been replaced with a similar control system less than four months before the accident.

At about 1030 on 17 February 2015, the Kea departed from the Auckland ferry terminal with 61 passengers on board. The master was the sole person on the bridge. As the Kea approached Devonport ferry terminal at its full service speed of 12 knots (about 22 kilometres per hour), the master transferred control of the two propulsion units from the vessel’s centre console to the starboard wing console in preparation for berthing.

However, the control for only the port propulsion units transferred to the starboard wing console, which went unnoticed by the master.

The Kea sustained significant damage to its starboard hull above the waterline and many passengers received minor injuries. Seven passengers were hospitalised with non-life-threatening injuries.

The Commission found that it was about as likely as not that the master lost control of the starboard propulsion system because he did not fully press the 'give-away' button on the centre console before taking control at the wing console.

The Commission also found that the master had not been sufficiently trained in and familiarised with the Kea’s new control system, and did not know how to use two other features that he could have used to prevent the collision.

The Commission also found that Fullers did not adequately manage the risks associated with the replacement of the Kea's propulsion control system and the vessel's re-entry to service, and that the replacement project should have been afforded a greater level of regulatory scrutiny by a surveyor.

The Commission identified four safety issues:
- the Fullers training and familiarisation system failed to ensure that the master was properly trained in and familiar with the Kea’s propulsion control system
- the Fullers system allowed the Kea to enter and continue service using the follow-up mode of operation, despite the company knowing that there were faults with that mode that were resulting in incidents
- the regulatory system did not ensure an appropriate level of surveyor oversight of the project to replace the Kea’s propulsion control system
- Fullers had not assessed the risk of operating ferries with unsecured passenger seating.

Fullers took safety actions to address three of the safety issues. The Commission made one recommendation to Maritime New Zealand to address the fourth.

The key lessons arising from this inquiry were:
- masters and other bridge crew must use all available means for monitoring the status of their manoeuvring and control systems, all the time, to maintain good situational awareness
- masters must be properly trained in and fully familiar with all aspects of their vessels' control systems and equipment before being allowed to take command of them
- the regulatory requirements contained in Acts, Maritime Rules and other statutory instruments are minimum requirements with which maritime operators must comply. They do not relieve operators of their responsibility to assess all risks in their operations, and reduce those risks to as low as reasonably practicable.
Related Safety Recommendation(s)
026/17
Location
Devonport wharf, Auckland (-36.833300,174.795300) [may be approximate]