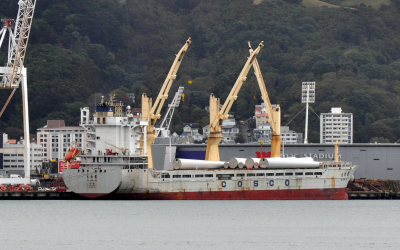 Meanwhile, one of the crew members had released his restraints in anticipation of disembarking the lifeboat. He was thrown clear of his seat and sustained a cut to the head, requiring overnight hospitalisation. None of the other three crew members was seriously injured. The lifeboat was undamaged.

The Transport Accident Investigation Commission (Commission) found that the wire pennants parted under tensile overload because they had all been significantly weakened by severe corrosion. Corrosion had gone undetected inside a plastic sheathing that the manufacturer of the lifting sling had placed around the wire pennants.

The presence of the plastic sheathing encasing the wire rope meant that neither the crew nor the various surveyors tasked with inspecting the launching system could inspect and maintain the wire rope as required by the International Maritime Organization Convention for the Safety of Life at Sea, 1974.

The Commission found that encasing steel wire in plastic sheathing when it is to be used in the marine environment has significant implications for maritime safety, especially when the wire must be regularly inspected and maintained in order to remain fit for purpose. A recommendation was made to the Director of Maritime New Zealand to raise this safety issue through the appropriate International Maritime Organization safety committee.

The Commission also recommended that the manufacturer of the lifeboat and the lifting sling cease the practice of totally encasing wire rope pennants with plastic, and inform all owners and operators using its system of this accident and the danger of leaving the wires encased with plastic sheathing.

The operator of the Da Dan Xia took the safety action of removing the plastic sheathing from all similar lifting slings in its fleet of ships.

A key safety lesson arising from this inquiry is that seafarers and surveyors alike must not make assumptions about the condition of any wire or other equipment that they cannot see, especially when the wire or other equipment has a safety-critical purpose and is required by rules, regulations or procedures to be thoroughly examined.
Related Safety Recommendation(s)
001/15
002/15
Location
Wellington (-41.274200,174.788500) [may be approximate]