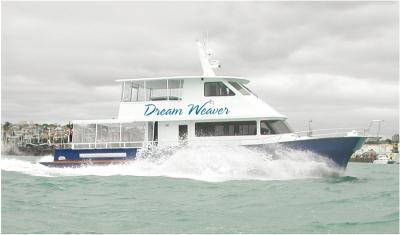 The Dream Weaver at sea. Courtesy of Dream Weaver Charters Limited.
Dream Weaver, flooding due to structural failure of the hull, Hauraki Gulf, 23 February 2014
Status
Closed
Occurrence Date
23 Feb 2014
Report Publication Date
26 Nov 2015
Jurisdiction
NZ
At about 1000 on Sunday 23 February 2014, the charter passenger catamaran Dream Weaver departed Westhaven Marina in Auckland for a dolphin- and whale-watching trip in Auckland's Hauraki Gulf. There were 36 passengers and a crew of four on board, comprising the master, the manager, the deckhand and a hospitality worker.

The weather conditions were forecast to deteriorate throughout the day, with winds predicted to reach 40 knots from the southwest by evening.

After about 50 minutes the Dream Weaver encountered a pod of dolphins in the inner Hauraki Gulf and spent about 40 minutes interacting with the pod. The master then decided to head out further to the outer Hauraki Gulf in search of whales.

The master turned the Dream Weaver around off Flat Rock near Kawau Island into the wind and waves. The wind speed had increased to 23 knots gusting to 33 knots, and the sea had become rough. The Dream Weaver was shipping seas onto its foredeck and waves were slamming against the centre bow under the bridge deck.

After about 30 minutes the bilge alarm sounded for the port hull. The laminated fibreglass on the port side of the centre bow had ruptured and seawater had flooded the forward compartment of the port hull.

The suction pipe on the primary bilge pump had become blocked with debris and the deckhand had not been trained to operate the secondary bilge-pumping arrangement. With the master committed to controlling the vessel, the crew were unable to pump out the water.

The master made a "Mayday" distress call as he sought shelter by taking the Dream Weaver closer to the shore. Several Royal New Zealand Coastguard vessels and the New Zealand Police launch responded. The Dream Weaver reached the shelter of a bay, where the passengers were transferred to the Police launch and taken back to Auckland. With the help of salvage pumps from the Coastguard, the Dream Weaver was able to continue to the nearby Gulf Harbour Marina, where it was lifted out of the water for inspection and repair.

The Transport Accident Investigation Commission (Commission) found that after 16 years of continual operation the Dream Weaver's hull had failed in a typically high stress area for catamaran vessels – in the bridge deck structure near the bow; and that the Dream Weaver had been driven too hard, outside its permitted wave-height/speed limits, for the sea conditions at the time, causing the hull to rupture at its most vulnerable point, the weakened areas near the bow.

The Commission also found that the operator's Safe Ship Management system (prescribed by Maritime New Zealand) had not addressed the following safety issues:
- poor 'housekeeping' practices on board that prevented the bilge-pumping system working
- a lack of sufficient crew training for emergency equipment, meaning the crew were unable to control the flooding
- the wave-height/speed operating restrictions for the vessel were not conspicuously promulgated and enforced.

One recommendation has been made to the Director of Maritime New Zealand for him to ensure that the Dream Weaver is fit for its intended purpose and that the operator’s safety management system is working as it should.

The key lessons identified from the inquiry into this occurrence are:
- because of their qualities and characteristics, catamarans can easily be operated outside their design parameters with catastrophic consequences. It is paramount that skippers be aware of and keep within any operating restrictions
- fibre-reinforced plastic's strength degrades with cyclic loading, which is usually synonymous with a vessel’s age. Operators and surveyors should factor in vessels' ages when inspecting, maintaining and setting operating parameters for such vessels
- heading in the same direction as the wind and waves in a boat can be deceptively benign. When on return trips, skippers must be absolutely aware of how their vessels will perform once turned into the wind and waves, particularly when initially travelling away from a sheltering coast with a deteriorating weather forecast
- crew members must be familiar with and well trained in operating emergency systems on board their vessels
- bilge suctions are easily blocked by debris. Bilge spaces must be kept clear of debris if a bilge-pumping arrangement is to be effective
- seawater trapped on the deck of any vessel is a potentially serious situation. Arrangements for freeing water from the deck must be adequate and kept clear at all times.
Related Safety Recommendation(s)
016/15
Location
Hauraki Gulf (-36.568300,174.858300) [may be approximate]