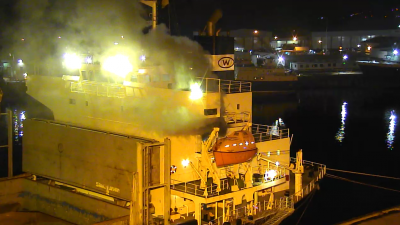 Taokas Wisdom - smoke billowing from the port-side emergency exit door on the B-deck. Credit TAIC.
Accommodation fire on board the log-carrier, Taokas Wisdom, Nelson, 11 July 2013
Status
Closed
Occurrence Date
11 Jul 2013
Report Publication Date
30 Jun 2014
Jurisdiction
NZ
On 11 July 2013, the bulk log carrier Taokas Wisdom was loading a cargo of logs at the Port of Nelson, New Zealand when fire broke out in one of the crew member's cabins. The fire was detected by the automatic fire detection system, which activated the ship's general alarm.

While the crew were responding to the fire alarm, the Port Nelson security officer saw smoke emitting from the ship and notified the Nelson Fire Service.

The ship's crew were able to bring the fire under control within about 25 minutes, after which firefighters from the Nelson Fire Service boarded the ship and used thermal imaging equipment to identify and extinguish any remaining hotspots.

The cabin where the fire started was extensively damaged. Other adjoining spaces suffered heat and smoke damage. Nobody was injured during the fire.

The Transport Accident Investigation Commission (Commission) was unable to identify the cause of the fire definitively, partly because some evidence had been disturbed when the crew began cleaning the cabin before a scene examination could be conducted.

A safety issue identified was that the monthly fire drills that were held on board the Taokas Wisdom did not ensure that all crew members were fully conversant with their duties and responsibilities, and did not result in the firefighting procedures being followed. The Commission made a safety recommendation to the ship operator to address this safety issue.

Notwithstanding that the crew brought the fire under control within 25 minutes, the Commission identified a number of safety lessons arising from the crew's firefighting performance, which were:
- establishing a command centre as a focal point for maintaining a management overview of a firefighting response will increase the chances of controlling a fire and minimising the damage it causes
- enclosing the space that is on fire (or leaving it enclosed) will help prevent the spread of the fire and minimise the damage it causes
- closing down the air supply to a space that is on fire is essential to extinguishing the fire.
Related Safety Recommendation(s)
017/14
Location
Port of Nelson (-41.259200,173.277500) [may be approximate]