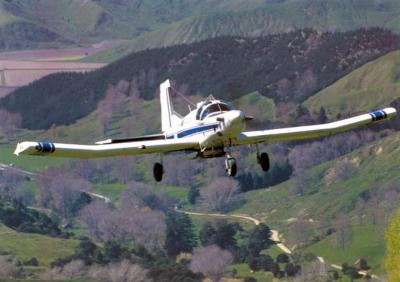 On the commencement of the third topdressing flight, witnesses reported, the aeroplane accelerated normally from the loading point. However, the aeroplane did not follow the direction of the airstrip around to the left, as it had done during the previous two flights. Instead, the aeroplane continued in a straight line from the load point and subsequently struck uneven terrain off to the right of the airstrip. The impact with the uneven terrain caused the right main undercarriage assembly to fracture off and damage the right wing and flap.

The aeroplane descended into the valley, striking a tree with the right-hand wing, then continued across the valley floor and impacted the far side of the valley, coming to rest inverted.

The aeroplane was destroyed by the impacts and a post-crash fire. The sole pilot occupant did not survive the accident sequence.

Why it happened
After departing the loading point, the aeroplane did not turn to align with the airstrip direction, as it had on previous occasions. The evidence did not show any attempt by the pilot to correct this deviation from the previous, and ideal, two take-off paths.

The absence of any corrective action by the pilot, including discontinuing the take-off, correcting the take-off path after encountering uneven and rough ground, dumping the load and/or making a radio call to the loader driver, could indicate the pilot was incapacitated and therefore was incapable of performing such actions.

The Transport Accident Investigation Commission (the Commission) examined a range of factors that either singularly or in combination may have caused the accident, including weather, mechanical, aircraft load, airstrip and medical factors. All factors, except medical, were discounted as possible contributing factors.

Because of the lack of evidence available to the investigation, the reason for the aeroplane’s deviation from the normal flight path could not be determined conclusively.

After an extensive analysis of the available evidence, including no evidence of any action being taken after the aeroplane deviated, the Commission concluded that it is about as likely as not that the pilot was incapacitated. There was no definitive evidence to support this finding directly; rather it was reached through a process of eliminating the unlikely scenarios.

What we can learn
No new safety issues were identified, and no recommendations have been made.