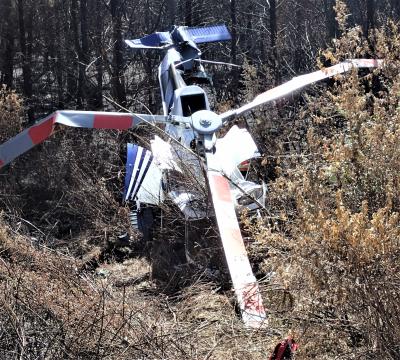 On 17 February 2019, an Airbus Helicopters AS350 helicopter, registered ZK-HEX was one of several helicopters assisting with the suppression of forest fires. The fires had been burning throughout the Nelson region over the preceding two weeks.

A tubular, segmented, stainless-steel ring was held in place at the top of the bucket with hook-and-loop fastener tabs. This ring was intended to maintain the circular shape of the top section of the bucket when it was being filled.

It was likely that during the accident flight, one or more of the hook-and-loop fastener tabs came undone, allowing the ring to become insecure and the bucket to lose rigidity. This likely resulted in a sudden change to the aerodynamic stability of the bucket in the airflow, leading to the bucket trailing behind the helicopter and the lifting line contacting the tail rotor. The reason for the hook-and-loop fastener tabs coming undone could not be determined.

The bucket manufacturer had developed design improvements to reduce the likelihood of the hook-and-loop fastener tabs coming undone, but the modification was not mandatory. Therefore, the Transport Accident Investigation Commission (Commission) has made a recommendation that the Cloudburst monsoon bucket manufacturer ensure that all Cloudburst monsoon buckets with this hook-and-loop fastener system are modified with the design improvements.

The monsoon bucket lifting line was of a length that likely increased the risk of the external load coming into contact with the tail rotor. The Commission found that at the time of the accident, there was insufficient guidance available to pilots on the appropriate line length for monsoon bucket operations. The aircraft manufacturer has since published a Safety Information Notice on this issue and the operator has incorporated this guidance into its operating procedures.

The bucket manufacturer had developed operational information on and limitations for the use of its monsoon buckets, but did not proactively promulgate this information to operators. This omission had the potential for operators to develop policies in isolation, possibly resulting in less-than-optimal safe working practices. As such, the Commission has made a recommendation that the bucket manufacturer review and enhance the Operation Manuals for all Cloudburst buckets to include any recommended operational and maintenance procedures, guidelines and limitations, and promulgate this information to all users of this equipment.

All occurrences that have safety implications should be reported through the operators’ internal safety management system. The Civil Aviation Authority should also be notified of all occurrences that meet the Civil Aviation Rules Part 12 - Accidents, Incidents, and Statistics criteria. Not reporting a safety-related occurrence is a missed opportunity to prevent a similar occurrence.
Related Safety Recommendation(s)
007/20
008/20
Location
Pigeon Valley, Nelson (-41.363664,173.003888) [may be approximate]