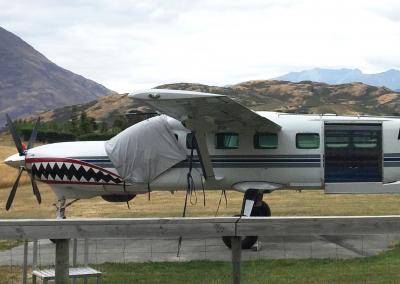 On 10 January 2018, NZONE Skydive was conducting commercial tandem skydiving operations from its Queenstown site near Lake Wakatipu, when a tandem pair experienced a double parachute malfunction.

The tandem pair was the last of nine tandem pairs to exit the aeroplane at 14,000 feet (about 4,300 metres) above the site. The droguefall stage was uneventful and the tandem master deployed the main parachute slightly higher than usual in order to reach the parachute landing area with ease.

The main parachute did not open symmetrically and the lines twisted. After unsuccessful attempts to correct the line twist, the tandem master cut away the main parachute and deployed the reserve parachute. By this time the tandem pair had drifted further out over the lake.

The Transport Accident Investigation Commission (Commission) found that the asymmetric opening of the main parachute canopy and subsequent line twist were likely due to the way the main parachute had been packed. The cause of the tension knot forming in the suspension lines of the reserve parachute could not be conclusively determined.

The tandem rider’s lifejacket likely could not be inflated sufficiently to support their head above water. The reason for the lifejacket not inflating fully and its state of serviceability before it was used could not be conclusively determined. In addition, the tandem master was not equipped with a lifejacket, which decreased their ability to remain afloat.

The Commission considered several aspects of this accident to be safety issues that had the potential to affect other parachuting activities in New Zealand:
- maintenance programmes ensure that equipment is airworthy and able to perform its functions when required. The operator’s lack of a maintenance and inspection programme for lifejackets introduced a risk to the operation
- rules and operating procedures are put in place to ensure a basic level of operational safety is achieved. If this guidance is not well defined, organisations that are required to comply may not achieve consistent or desired outcomes. The Civil Aviation Rules did not clearly define the minimum safety requirements for tandem parachute descents being conducted near significant bodies of water. This resulted in inconsistencies between the parachuting entities guided by the Civil Aviation Rules such as parachute organisations and Part 115 parachute operations, and increased the risk to parachutists
- standards are in place for emergency equipment to ensure it meets a set of minimum requirements. The standards referenced in the Civil Aviation Rules for lifejackets did not consider the specific requirements for parachuting. There is a risk that products certified to these standards will not be suitable for parachuting conditions
- emergency response plans ensure that timely assistance can be provided in an emergency. These plans need to consider the likely environments in which emergencies will occur. In not adequately considering the minimum survival times for people immersed in cold water, there was a risk that any water emergency response by the operator would not be able to provide timely assistance
- effective safety management in the entire parachute sector relies on the assessment of occurrence data. Without key fields being recorded by the Civil Aviation Authority for parachute occurrences that include the equipment fitted to the parachutes, the effectiveness of this tool for safety management in the sector is reduced.

Since this accident the operator has made several improvements to its policy and procedures regarding the safety issues identified. As such, no recommendations have been made to address those issues.

The key lesson identified from the inquiry was that if a parachute operation is based near a significant body of water, the operator needs to consider and mitigate the additional risks presented by a parachutist unintentionally landing in the water.

All parachutists would benefit from gaining practical or simulated experiences of a water landing before being issued with their initial parachutists’ certificates.

All parachute-sector participants may benefit from continued engagement with each other to improve industry guidance and the safety of parachuting in New Zealand.