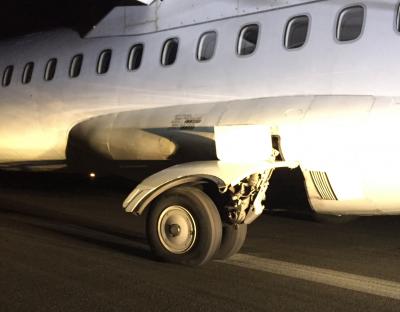 The broken running gear
ATR72, ZK MCY Landing gear failure Nelson 9 April 2017
Status
Closed
Occurrence Date
9 Apr 2017
Report Publication Date
5 Dec 2019
Jurisdiction
NZ
On 9 April 2017, an ATR72 aeroplane was on approach to land at Nelson with 71 persons on board. When the crew lowered the landing gear, they received an alert that the right-hand main landing gear was not locked in the down position.

Unable to resolve the issue using the standard procedures, the crew diverted the aeroplane to the more suitable Palmerston North Aerodrome, where they made a successful landing. The landing gear did not collapse on landing and damage was limited to one burst tyre. Nobody was injured.

The Transport Accident Investigation Commission found that the landing gear problem was caused by the failure of the two landing gear locking springs, designed to hold the right-hand landing gear in a down and locked position, and that the springs failed because of corrosion induced cracking. Salt, as a result of the saline environment in which the aeroplane was operated, was considered as the likely initiator of the corrosion.

The Commission also found that the crew’s decision to divert to Palmerston North Aerodrome was appropriate and the preparation for the emergency landing was well conducted in accordance with company procedures. However, the crew’s raising and lowering the landing gear several times before the emergency landing was outside the documented procedures and had the potential to exacerbate the condition.

Because of the safety actions taken by the operator and aeroplane manufacturer, no new recommendations were made.

The key lessons arising from the inquiry:
- this incident demonstrates the importance of a pre-flight visual inspection of critical components such as those of the landing gear, particularly when the integrity of the components relies on pre-flight visual inspections
- although on this occasion re-cycling the faulty landing gear did not have any adverse outcome, this action was not in accordance with flight crew operating manual procedures. In other failure cases, recycling can exacerbate the extent of the problem
- aircraft recorders provide a valuable source of information for an investigation. Operators should enforce strict adherence to post-accident and incident procedures for preserving the data on any on-board recorder.
Location
Nelson (-40.320555,175.616944) [may be approximate]