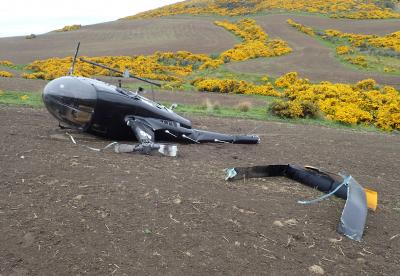 The crashed helicopter at the site
Robinson R66 helicopter, Partial power loss, forced landing, Hokonui Hills, Southland, 14 November 2016
Status
Closed
Occurrence Date
14 Nov 2016
Report Publication Date
6 Dec 2018
Jurisdiction
NZ
On 14 November 2016, a Robinson Helicopter Company R66 helicopter was conducting an agricultural spraying operation around the Hokonui Hills in Southland, with one pilot on board. On the last spray run for the day the pilot received an indication of low rotor revolutions-perminute, which was a critical condition that required immediate action. However, at that time the helicopter was too low to recover from the situation, so the pilot turned the helicopter and attempted a ‘run-on landing’ – a manoeuvre used to transition from forward flight to a landing on the surface when there is insufficient power available to sustain a hover.

The helicopter landed heavily and pitched forward, causing the main rotor blades to contact the ground. The helicopter was substantially damaged, but the pilot escaped with minor injuries only.

The Commission also found that the operator’s refuelling procedures for remote sites left several opportunities for fuel contamination to occur.

The Commission identified the safety issue that more educational material is needed to alert operators to the risk of contaminated fuel when operating and refuelling in remote, dusty environments.

The Commission made two recommendations, one to the Director of Civil Aviation to provide the industry with more educational material and guidance on mitigating the risk of contaminated fuel when operating at remote sites, and one to the President of Aviation New Zealand to promulgate the lessons learned from this accident to its members with a view to
increasing awareness of the risk of fuel contamination during remote refuelling procedures.

The key lessons arising from this inquiry are:
- refuelling aircraft at remote locations increases the risk of fuel contamination. Operators should take all precautions to prevent any debris entering the fuel supply chain, from the initial fuel supplier to the aircraft fuel tank
- aircraft fuel-filtering systems are an important defence against contaminated fuel causing an accident. Where available, operators should consider fitting additional airframe filters to aircraft being operated and refuelled at remote locations.
Related Safety Recommendation(s)
027/18
028/18
Location
Hokonui Hills, Southland (-46.026800,168.588300) [may be approximate]