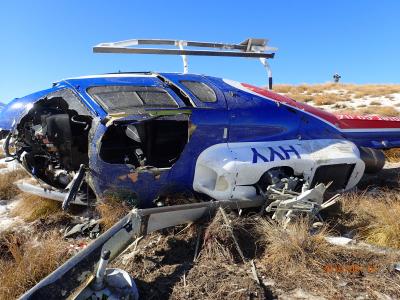 One of the flights was to take five passengers for a snow-landing experience on Mount Vanguard, north of Queenstown. Soon after take-off the pilot saw that the weather had deteriorated in that direction, so he changed the destination to Mount Sale, northeast of Arrowtown.

The pilot approached the intended landing site, at an elevation of approximately 1,500 metres, from the north. He said that the approach proceeded normally until the final stage, when the rate of descent suddenly increased, so he increased the power to go around. Although the helicopter responded to the pilot’s control inputs, it struck the ground hard with the landing gear and the main rotor blades, and came to rest on its left side.

One of the passengers suffered a minor injury to his knee. The helicopter was substantially damaged.

The Transport Accident Investigation Commission (Commission) found that the helicopter weight and balance were within limits, the engine was delivering high power and the helicopter was operating normally. The pilot had the required training and experience for the flight.

The Commission found that the landing approach was made with a tailwind when the pilot was expecting a crosswind. The pilot made a relatively fast, low and close approach to the landing site. This technique might not give pilots enough time to confirm the actual wind before landing, nor does it ensure that their intended escape routes remain useable throughout the approach.

The Commission identified a safety issue in that the operator had had four serious landing accidents in three years. While there were some similarities in the circumstances, the factors for most of these accidents were not determined conclusively by the Commission’s inquiries or by the operator’s internal investigations.

Therefore the Commission made a recommendation that the chief executive of The Helicopter Line, in consultation with the New Zealand Civil Aviation Authority, review The Helicopter Line’s safety management system audit process to ensure that its safety policy, safety assurance, risk management, and promotion of safety are sound.

Key lessons arising from this inquiry were:
- human factors can have both positive and negative effects on situational awareness. It is important for pilots to remain vigilant for changes in environmental conditions.
- the loss of the emergency locator transmitter antenna during the break-up sequence demonstrated once again that an alternative means of independent, real-time flight following would be beneficial in respect of search and rescue. It is prudent to use a flight-following service or facility where possible.
Related Safety Recommendation(s)
004/18
005/18
Location
North of Arrowtown (-44.919444,168.906444) [may be approximate]