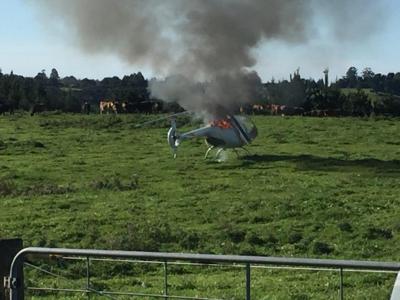 The Transport Accident Investigation Commission (the Commission) found that the in-flight fire was initiated by the ejection of a ceramic insulator and centre electrode from one of the engine spark plugs. The loss of the spark plug allowed the combustion flame from that cylinder to ignite the engine cooling shroud.

The Commission also found that the failed spark plug was a genuine part that had been approved by the relevant airworthiness authority for use as a part of the helicopter's ignition system, but it failed because it had not been swaged during the manufacturing process. Swaging was the process required to bend the cold metal into place to hold in the insulator.

This type of failure with spark plugs is so rare that it does not have significant implications for aviation safety.

The pilot's prompt actions were appropriate and commendable. The immediate landing, combined with the protection provided by the engine bay firewall, prevented a more serious outcome.

The Commission issued no recommendations. The safety actions taken by the Civil Aviation Authority of New Zealand and the manufacturer of the helicopter, in conjunction with the European Aviation Safety Agency, were considered sufficient to identify other defective spark plugs.

The key lesson arising from the inquiry was that maintenance personnel need to be vigilant for product anomalies when installing components onto aircraft, even when the components come from approved suppliers.
Location
Rotorua (-38.086700,176.345000) [may be approximate]