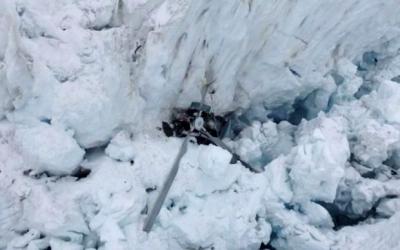 The crashed helicopter in the Fox Glacier crevasse. Police photo
Airbus Helicopters AS350BA, ZK-HKU, collision with terrain, Fox Glacier, 21 November 2015
Status
Closed
Occurrence Date
21 Nov 2015
Report Publication Date
23 May 2019
Jurisdiction
NZ
On Saturday 21 November 2015, an Airbus Helicopters AS350 (‘Squirrel’) helicopter was conducting flights out of the operator’s base near Fox Glacier town. The weather conditions that morning had caused the cancellation and postponement of several flights.

The pilot decided that the weather had improved enough to conduct a scenic flight with passengers to the head of the Fox Glacier valley. At 0945 the helicopter departed with the pilot and six passengers on board for an expected 20-minute flight. The weather was cloudy and changeable as the flight departed. Weather permitting, the flight was to include a snow landing on Chancellor Shelf above the glacier. The pilot spoke with the pilot of another helicopter flying in the neighbouring Franz Josef Glacier valley. That was the last radio contact with the helicopter.

The Transport Accident Investigation Commission (Commission) found it unlikely that a mechanical failure with the helicopter was a factor in the accident. Although not all of the wreckage was recovered, an examination of the recovered components (including all the dynamic assemblies) revealed no pre-existing failure.

The Commission also found that the weather conditions on the day were unstable and unsuitable for conducting a scenic flight. The localised weather conditions in the area were very likely to have been frequently below the minimum criteria required by the Civil Aviation Rules.

It is very likely that when the helicopter took off from Chancellor Shelf and descended down the valley, the pilot’s perception of the helicopter’s height above the terrain was affected by one or more of the following conditions:
- cloud
- precipitation
- flat light conditions
- condensation on the helicopter’s front windscreen.

The Commission found that the pilot had not been properly trained and did not have the appropriate level of experience expected under the operator’s categorisation scheme for a senior pilot in this type of operation. The operator’s system for training its pilots was ill-defined and did not comply fully with the Civil Aviation Rules.

The operator’s training system did not have sufficient oversight by the designated senior persons, and this was a factor that allowed the pilot to be assigned roles and responsibilities without the proper training and experience.

The Commission found that the Civil Aviation Authority had identified significant non-compliance issues with the operator’s training system and managerial oversight that had warranted intervention long before this accident occurred.

The Commission identified two safety issues:
- the operator’s system for training its pilots did not comply fully with the requirements of the Civil Aviation Rules or the operator’s approved operations specifications, and did not adequately prepare the pilot for the role and responsibilities required for flight operations that day
- the operator had been allowed to continue providing helicopter air operations with little or no intervention from the Civil Aviation Authority, in spite of the Authority having identified significant non-compliances with the operator’s training system and managerial oversight.

In 2014 the Commission had made a recommendation to the Director of Civil Aviation that stricter requirements be placed upon holders of air operator certificates to correct identified deficiencies, and that when serious safety issues were found, they always resulted in audit findings.

The key lessons arising from this inquiry include:
- aircraft operators’ senior management have a regulatory duty to maintain proper and effective oversight of their operations. Doing otherwise will compromise the safety of the operations and increase the risk of repeat accidents
- proper training of pilots is critical to the safety of air operations. Any training and competency system must ensure that pilots are trained and experienced to levels appropriate for their roles and responsibilities
- every operator must provide adequate supervision of its pilots, appropriate to the pilots’ experience and training and the nature of the operations
- aircraft manufacturers set ‘never exceed’ limitations for good reasons. Pilots should not, under any circumstances, load or operate their aircraft outside the limitations
- with knowledge comes responsibility. If a senior person working for an air operator or an inspector working for the regulator identifies a serious safety issue with an operation, the issue should be formally raised and action taken to address it.
Related Safety Recommendation(s)
002/19
Location
Fox Glacier (-43.501700,170.087000) [may be approximate]