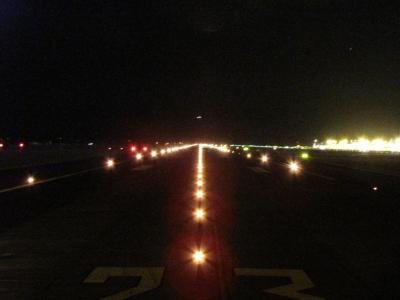 Runway 23 Left, Auckland Airport viewed from the runway centreline. Credit TAIC.
Misaligned take-off at night, Airbus A340, CC-CQF, Auckland Airport, 18 May 2013
Status
Closed
Occurrence Date
18 May 2013
Report Publication Date
24 Mar 2016
Jurisdiction
NZ
On 18 May 2013 an Airbus A340 aeroplane operated by LAN Airlines, Chile was making an early-morning departure from Auckland Airport for a scheduled return flight to Sydney. In addition to the captain and the first officer, there were eight cabin crew and 196 passengers on board.

The two pilots performed the remaining tasks and before-take-off checks while the aeroplane was taxiing. The captain then turned the aeroplane sharply to line up with what he thought were the runway centreline lights, but which were actually the right-hand runway edge lights, and applied take-off thrust.

A routine runway inspection later that morning found that seven of the elevated runway edge lights were damaged and required replacement. The runway was closed for 20 minutes while the debris was removed. When the aeroplane was inspected after it arrived in Sydney, two of the tyres were found to be damaged and had to be replaced.

The Transport Accident Investigation Commission (Commission) found that at some point while the pilots were conducting last-minute checks and tasks before the take-off, the captain lost awareness of precisely where his aeroplane was in relation to the runway centreline.

The Commission also found that three other factors contributed to the misaligned take-off: the potential illusion created by the illuminated manoeuvre area guidance signs parallel to the runway; no other means were used to confirm positively the aeroplane's position prior to take-off; and the rolling take-off which reduced the time available for either pilot to realise the error.

The Commission identified two broader safety issues relating to: the intensity settings for aerodrome lighting; and administrative errors and potential ambiguity in the way relevant International Civil Aviation Organization standards for airport design and operations might be interpreted. The Commission could not determine whether either of these safety issues contributed to the incident. Nevertheless, the Commission has made recommendations to the Director of Civil Aviation and the chief executive of Auckland International Airport Limited to address these safety issues.

Key lessons arising from this inquiry are:
- entering an active runway is a critical phase of flight. Pilots must give the manoeuvre their full attention and use all available means to confirm that they are lining up in the centre of the correct runway
- it is essential that pilots report as soon as practicable any suspicion that a runway is contaminated with debris.
Related Safety Recommendation(s)
017/15
019/15
020/15
Location
Auckland Airport (-37.006300,174.805300) [may be approximate]