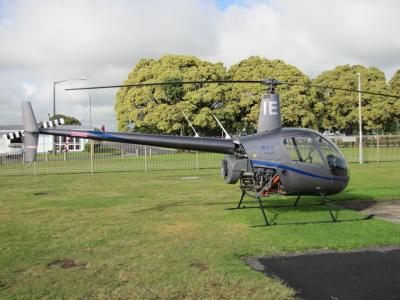 Robinson R22, ZK-HIE. Courtesy of Ice Aviation.
In-flight loss of control, Robinson R22, ZK-HIE, near New Plymouth, 30 March 2013
Status
Closed
Occurrence Date
30 Mar 2013
Report Publication Date
11 Jun 2015
Jurisdiction
NZ
This accident occurred during a dual training flight to revise handling procedures prior to the student pilot being tested for the initial issue of a private pilot licence. One of the exercises to be revised was the recommended recovery procedure in the event of an un-commanded right roll, as might occur when subjected to an acceleration (or force) less than that due to gravity (G). The instructor had no intention of deliberately causing a low-G condition.

The instructor first demonstrated an unrelated helicopter flight characteristic, main rotor flap-forward that is a normal response to a speed reduction, during the climb. He had just completed that demonstration and was about to commence the roll-recovery exercise when the helicopter suddenly rolled to the right and pitched down. In spite of being confronted with an un-commanded right roll, the instructor did not follow the recovery procedure he had been about to discuss. However, he did regain control of the helicopter and was able to land safely. The occurrence caused a mast bump and damage that required the replacement of many of the main rotor system components.

A mast bump event in a Robinson Helicopter Company (Robinson) helicopter usually has a fatal outcome. The Transport Accident Investigation Commission (Commission) has inquired into other mast-bump and loss-of-main-rotor-control accidents in Robinson helicopters and was concerned that the incidence of such accidents had not decreased. Therefore, this safe recovery was an opportunity to understand the circumstances and determine the causes of the temporary loss of control. The intended exercise was part of mandated safety awareness training, but when the helicopter did commence an un-commanded right roll, the instructor did not follow the procedure recommended in that training. Therefore the inquiry also considered the content and delivery of the mandated training.

The Commission made the following findings:
- no environmental condition or helicopter defect caused the un-commanded roll
- it was probable that the un-commanded roll was caused by an inadvertent reduction in G during the transition from the flap-forward demonstration to the next exercise, while the engine power was at a relatively high setting
- the section of the United States Special Federal Aviation Regulation No. 73, which requires Robinson helicopter pilots to have dual flight instruction in the effects of low-G manoeuvring, appears to contradict the R22 helicopter flight manual, which prohibits the demonstration of low-G conditions
- the importance of some critical safety information in Robinson flight manuals was likely to have been diminished by Robinson’s use of "Caution", rather than "Warning", for operating conditions and practices that involve a risk of personal injury or loss of life.

The Commission is making the following recommendations to the Administrator, Federal Aviation Administration (FAA) of the United States, which certificates Robinson helicopters:
- that he amend section 2(b) of Special Federal Aviation Regulation No. 73 – Robinson R-22/R-44 Special Training and Experience Requirements to make it clear that dual instruction in the "effects of low G maneuvers" is limited to discussion only, and to reiterate that deliberate in-flight reduced G conditions are prohibited;
- that he require Robinson Helicopter Company to amend its flight manuals to include the use of "Warning" for those operating conditions and practices that involve a risk of personal injury or loss of life

The key lesson learnt from the inquiry into this occurrence was:
Pilots, particularly flight instructors, must be alert to conditions that could result in an inadvertent breach of a flight manual prohibition of low G.
Related Safety Recommendation(s)
003/15
007/15
Location
New Plymouth (-39.033369,174.200048) [may be approximate]