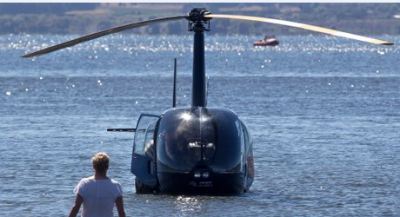 ZK-HAD in the lake. Credit TAIC.
Robinson R44, ZK-HAD, engine power loss and ditching, Lake Rotorua, 24 February 2013
Status
Closed
Occurrence Date
24 Feb 2013
Report Publication Date
29 Jan 2015
Jurisdiction
NZ
On 24 February 2013 a Robinson R44 Raven II helicopter operated by Volcanic Air Safaris Limited had just departed on its second scenic flight for the day, with the pilot and three passengers on board, when the engine lost power. The pilot put the helicopter into autorotation and turned the helicopter towards the shoreline, where she carried out a successful ditching in shallow water near the lake edge. The pilot and passengers were able to evacuate the helicopter uninjured. They were picked up shortly afterwards by a nearby jet boat.

The Transport Accident Investigation Commission (Commission) determined that the most likely cause of the engine power loss was a malfunctioning of the engine's right magneto. The malfunction was caused by engine oil that had accumulated in the magneto because an oil slinger had been omitted during a maintenance procedure.

The Commission also found that the imported, second-hand engine and its associated records had not been subjected to the required level of scrutiny before they were released to service, although it is unlikely that this safety issue contributed to the power loss.

This report also comments on how the level of risk to people involved in helicopter operations over water, where there is any chance that a helicopter might have to ditch in water, could be reduced if all occupants were made to wear life jackets.

The key lesson learnt from the inquiry into this occurrence was:
- purchasers of aviation parts sourced without the accompanying proper documentation need to research thoroughly the service histories of the components, as do certifying engineers carrying out the required conformity inspections.
Related Safety Recommendation(s)
025/14
026/14
Location
Lake Rotorua (-38.123300,176.243300) [may be approximate]