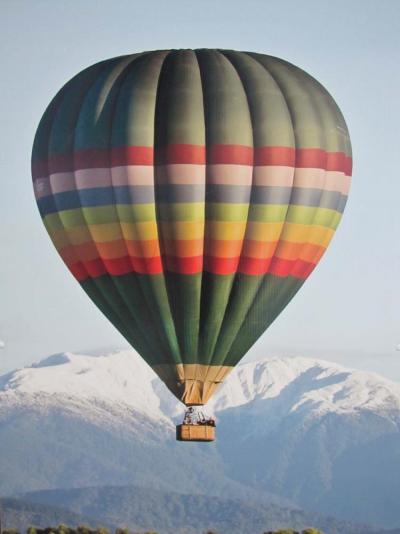 Cameron Ballons, A210, ZK-XXF on an earlier flight . Courtesy of Geoff Walker.
Hot-air balloon collision with power lines and in-flight fire, near Carterton, 7 January 2012
Status
Closed
Occurrence Date
7 Jan 2012
Report Publication Date
31 Oct 2013
Jurisdiction
NZ
At 0639 on Saturday 7 January 2012, a Cameron Balloons Limited A210 hot-air balloon lifted off from near Carterton in the Wairarapa area for a commercial flight. There were one pilot and 10 passengers on board. The weather conditions were fine with a light and variable wind, which was suitable for the flight. The balloon had been airborne for about 35 minutes when the pilot began to descend the balloon in preparation for landing in the Somerset Road area.

The balloon changed direction several times as it descended to lower levels. At about 0720 the balloon descended to between 5 and 7 metres (m) from the ground as it drifted over a silage paddock. The paddock was bounded on 2 sides by 33-kilovolt (kV) power lines with an average height of about 9 m. The balloon had earlier drifted near that paddock at a height of between 30 and 60 m, heading in the opposite direction.

The balloon was drifting towards the power lines on the far road-end boundary when the wind changed and took it towards power lines closer to the adjacent boundary. The pilot applied the burners to try to out-climb the power lines, but the basket of the balloon became entangled in them.

About 15-30 seconds later, at 0722, an intense electrical arcing occurred and fire erupted in the lower part of the basket. One of the balloon’s liquefied petroleum gas (LPG) fuel cylinders was ruptured by the electrical arcing, and escaping fuel intensified the fire.

Two of the passengers jumped while the basket was still caught on the wires and continuing to climb. The height was about 20 m by this time and they died from their injuries. Heat from the fire further raised the air temperature in the balloon envelope to a point where it broke the wire that was restraining it. The balloon rapidly ascended to a height of between 110 and 150 m before the balloon envelope caught fire and collapsed, and the balloon fell to the ground. The pilot and 8 remaining passengers died from their injuries.

Post-mortem toxicology tests revealed the pilot had a tetrahydrocannabinol (THC) level of 2 micrograms per litre (ug/l) of blood. THC is an active ingredient of cannabis. The Commission concluded that this THC level had been caused by both long-term and recent use of cannabis. While it is difficult to say how much each type of use contributed to the result, cannabis is known to affect a person's judgement and decision-making ability. Poor judgement and poor decision-making were factors contributing to this accident. The Commission found that the pilot's use of cannabis could not be excluded as a factor contributing to his errors of judgement, and therefore to the accident.

The Commission has already made recommendations to the Government about passing legislation to address the safety issue of the use of performance-impairing substances in all transport modes. The Commission makes a further recommendation on this matter.

Although not relevant to this accident, the Commission also expressed concern at the lack of regulation covering private ballooning. The Civil Aviation Authority of New Zealand (CAA) has already issued a notice of proposed rule-making (NPRM) to address this safety issue.

Both long-term and recent use of cannabis may significantly impair a person's performance of their duties, especially those involving complex tasks. Under no circumstances should operators of transport vehicles, or crew members and support crew with safety-critical roles, ever use it.

Power lines are a well recognised critical hazard to hot-air balloon operations. Balloon pilots should give them a wide margin and if they ever inadvertently encounter them, they should follow the balloon manufacturers' advice and best industry practice to mitigate the possible consequences.
Related Safety Recommendation(s)
012/13
001/12
Location
Carterton (-41.016700,175.550000) [may be approximate]