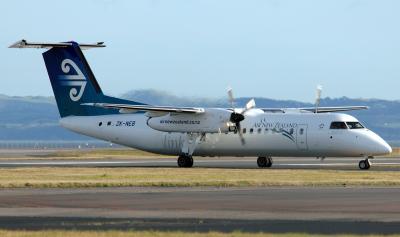 The pilots began working through a checklist to troubleshoot the problem. The checklist directed them to an independent verification system designed to show whether the individual landing gear legs were locked down. That system showed the pilots 3 green lights, which verified that all the landing gear was down and locked, in spite of the other indications that the nose landing gear was not.

The Transport Accident Investigation Commission (Commission) found that other events involving the same nose landing gear in the weeks preceding this incident had probably been caused by the same condition that prevented the normal extension, debris within the hydraulic fluid, but that that condition had not been identified as the cause of those previous events. The Commission also found that the primary landing gear indication system had shown correctly that the nose landing gear was not locked down, but the pilots had been misled by the verification system. The verification system was found to be unreliable. The Commission found that the pilots ought to have heeded the aural warnings, which sounded on the final approach, and should have abandoned that landing attempt until the actual position of the nose landing gear had been determined. Additional findings related to crew resource management (CRM).

The operator, Air Nelson Limited, and the aeroplane manufacturer, Bombardier, took a number of safety actions to address issues raised in this report. However, one safety issue had not been resolved, so the Commission made a recommendation to the Director of the New Zealand Civil Aviation Authority to work with the Canadian authorities to require the manufacturer to improve the reliability of the landing gear verification system.

Key lessons arising from this inquiry were:
- when critical systems begin intermittently to malfunction or behave abnormally, this is often a precursor to total failure. For this reason the diagnosis of these problems should be exhaustive and multifaceted
- the more a pilot knows about aircraft systems, the better armed they will be to deal with emergency and abnormal situations.
- aircraft warning systems are designed to alert pilots to abnormal conditions. Alerts should not be dismissed without considering all other available information
- pilots must retain sufficient knowledge of aircraft systems to deal with situations not anticipated by Quick Reference Handbooks.
Related Safety Recommendation(s)
027/12
028/12
Location
Blenheim (-41.517832,173.869780) [may be approximate]