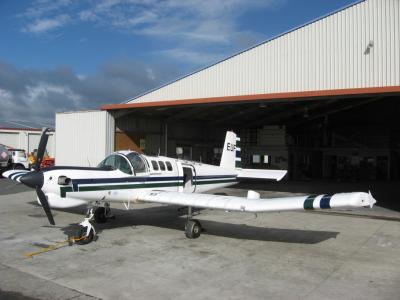 The aeroplane had been modified from an agricultural aeroplane into a parachute-drop aeroplane three months before the accident. The modification had been poorly managed, and discrepancies in the modification documentation were not detected by the Civil Aviation Authority of New Zealand, which approved the change in role.

On 9 May 2012 the Transport Accident Investigation Commission (Commission) published Final Report 10-009 (final report) on its inquiry into the causes and circumstances of the accident.

The Coroner conducted his inquest into the deaths of the aeroplane's occupants between 13 and 17 August 2012 and published his findings on 3 May 2013. Some witnesses at the inquest questioned some of the processes followed by the Commission during its investigation, and questioned the validity and accuracy of some of the findings in the Commission’s published report.

The Commission was not formally requested to re-open its inquiry, nor did any party offer any new and significant evidence that the Commission had not already considered in its initial inquiry. However, on 15 April 2014 the Commission decided to review the evidence relating to its findings as to the causes and circumstances of the accident, including evidential matters that have arisen since the publication of its report into the matter.

This addendum to the final report can be found using the link in the sidebar to the right, discusses the conduct and results of the review of evidence (the review). The addendum should be read in conjunction with the final report.

Findings
As a result of the review, the Commission made the following additional findings:

- ZK-EUF was 110 kilograms over its maximum permissible weight on the accident flight, but was still 149 kilograms lighter than the maximum all-up weight for which it had been certified in its previous agricultural role. Therefore the excess weight alone would have been exceptionally unlikely to have caused the accident
- the aeroplane's centre of gravity is estimated to have been at least 0.120 metre rearward of the flight manual limit
- the aeroplane had been flown routinely without its pilots knowing the weight and balance for the flights. The centre of gravity position affects how controllable an aeroplane is. Therefore the risk associated with the parachuting flights was increased by the pilots not knowing accurately the centre of gravity position
- flight tests indicated that the aeroplane should have been controllable at take-off, in the absence of any adverse factor such as adverse elevator trim, and with the centre of gravity position estimated for the accident flight. Therefore the centre of gravity position alone should not have caused the accident. However, in combination with any other adverse factor, a very rearward centre of gravity increased the risk of the pilot losing control of the aeroplane
- it was exceptionally unlikely that the pilot had attempted the take-off with the control stick locked
- the engine was delivering power throughout the short flight and at the time of impact. No relevant pre-existing technical defect with the aeroplane was identified, but the possibility of such a defect cannot be excluded
- the Commission considered various adverse factors that might have been present singly or in combination, but could not determine the cause of the excessive pitch-up at take-off that preceded the steep climb and the subsequent stall.

No new safety issues were identified by the review. Therefore the Commission has made no new recommendations.

In its final report the Commission made six recommendations to the Director of Civil Aviation. Three of them related to the operation of parachute-drop aircraft, two related to the process for converting aircraft to another purpose and one related to seat restraints. A recommendation was made to the Minister of Transport regarding the need for a drug and alcohol detection and deterrence regime for the various transport modes.