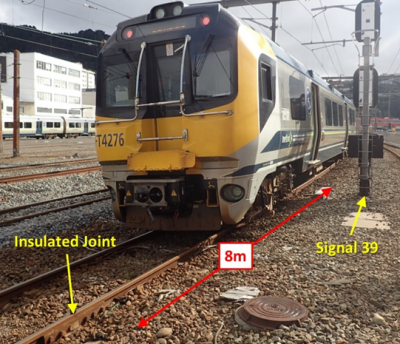 The train was under the control of a signal box operator (signaller). The signaller referred to the mimic screen and noted that it was showing the train occupying a single section of track between Signals 37 and 39. However, the rear of the train had not quite passed Signal 39. It had cleared an insulated joint in the rail that marked the end of one section and the start of the next on the signaller’s mimic screen, but the insulated joint was eight metres away from the actual signal. The rear of the train had come to rest between the insulated joint and the actual signal.

No sooner had the train begun moving than it crossed back over the insulated joint in the rail. The signaller saw on the mimic screen that the train had passed Signal 39 and was heading towards the inbound train. The signaller called the driver to stop the train. The train stopped about 120 metres past the red signal. There was no collision and nobody was injured.

The Transport Accident Investigation Commission (Commission) found that the situation was created because the signalling system was giving information to the signaller that did not match what was happening in the field. The eight-metre separation between the signal and the insulated joint had not been identified as an issue when the lines in the area were modified and upgraded in 2010.

The Commission identified two safety issues that had been identified in a previous inquiry:
- there is a heightened risk of trains colliding within the approaches to Wellington Station because limited space makes the track layout congested
- a number of reasonable measures had not been taken to further reduce the risk of trains colliding in the approaches to Wellington Station.

The key safety lesson arising from this accident is that trains should not be unnecessarily authorised to proceed up to red signals in congested areas, because the reduced safety margins in these areas increase the risk of a collision if a signal is passed at danger.
Location
Wellington (-41.273111,174.784128) [may be approximate]