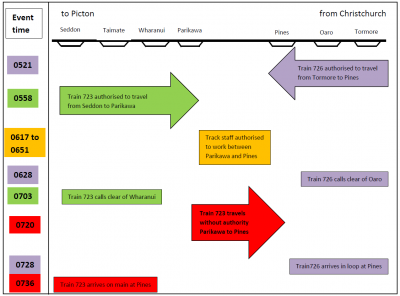 The driver of the southbound train correctly wrote Parikawa as the terminating track warrant station, but subsequently formed the belief that his track warrant terminated at Pines instead. The southbound train passed through Parikawa and stopped at Pines. Fortunately, the driver of the hi-rail vehicle had completed his task and removed his vehicle from the track; otherwise there would have been a high risk of collision between the train and his vehicle.

The Transport Accident Investigation Commission (Commission) was not able to determine conclusively at what point and why the train driver formed the belief that his train had authority to proceed through Parikawa to Pines.The Commission found that the train driver's roster alone was unlikely to have caused the driver to be fatigued. However, there were other factors that could have been affecting the quality of sleep obtained.

The Commission found that the train driver's performance was likely to have been affected by a number of medications that he had been prescribed in response to work- and non-work-related injuries.

The Commission identified the following safety issues:
- the train driver, who was performing a safety-critical role, had been prescribed a number of potentially performance-impairing medications without the knowledge of the industry health professionals
- there was no requirement for private medical practitioners to inform the rail industry medical professionals when they became aware that a person who performed a safety-critical role had medical conditions or had been prescribed performance-impairing medications that could render that person unfit for normal duty
- there was no requirement for the driver to complete the safety-critical worker health questionnaire before he presented for a special 'triggered' health assessment
- there was little or no warning system built in to KiwiRail’s procedures to mitigate the risk of the track warrant control operating system failing due to human error.