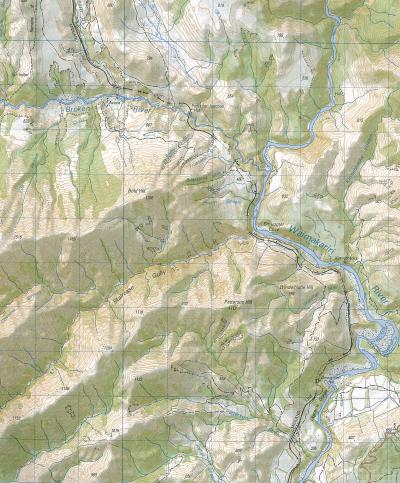 Journey of the loaded coal train and alicart. Credit TAIC.
Track occupation irregularity, leading to near head-on collision, Staircase-Craigieburn, 13 April 2011
Status
Closed
Occurrence Date
13 Apr 2011
Report Publication Date
17 Oct 2013
Jurisdiction
NZ
On Wednesday 13 April 2011, a loaded coal train was travelling through the Craigieburn-Staircase area on the Midland Line, en route from Ngakawau to Lyttelton. The coal train was travelling more slowly than usual because of infrastructure worksites in the area and because it had a problem with its dynamic brake operation.

A KiwiRail track engineer called the train controller and asked for permission to "on-track" his alicart rail vehicle at Staircase and travel towards Craigieburn in order to reach a remote location not accessible by road. The train controller assumed without checking that the coal train had already passed Staircase going in the opposite direction, so she authorised the track occupation.

The track engineer on-tracked the alicart and proceeded towards the oncoming coal train. A structures inspector working in the area at the time overheard the radio calls and recognised the potential for a near collision. He alerted the coal train driver, who then stopped his train, narrowly averting a head-on collision in a tunnel.

The near collision occurred because the train controller did not comply with KiwiRail rules and procedures, which required her to check where the loaded coal train was before authorising the track engineer to on-track his alicart. There were also a number of wider systemic issues beyond the train controller’s control, which increased the risk of her making the error. These were:

The key lessons from this inquiry were: